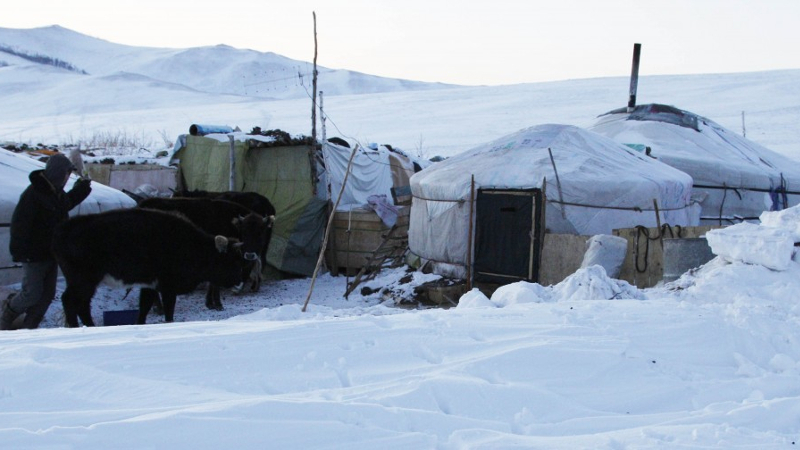 AKIPRESS.COM - Severe winter conditions in Mongolia, known as Dzud, are threatening the livelihoods of thousands of Mongolian herders in eastern and northern parts of the country. Dzud is caused by the twin impacts of drought in the summer, resulting in insufficient grass in pastures and low production of hay, and harsh conditions in the winter, including heavy snowfall and extremely low temperatures.

More than 157,000 people are affected across 17 of Mongolia’s 21 provinces. Livestock deaths have risen in recent weeks and according to the National Emergency Management Agency (NEMA), by 7 February over 46,000 animals had perished from starvation and cold.

On February 16, the IFRC launched an International Emergency Appeal to support the Mongolian Red Cross who are responding to the crisis in four of the worst-affected provinces - Uvs, Zavkhan, Khuvsgul and Selenge. The IFRC appeal aims to raise 655,500 Swiss francs (Euros 614,000 Euros, $654,000) to target assistance at more than 11,000 people considered to be most at risk.

Herder Uranchimeg Terbish, from Khuvsgul province has already lost dozens of her animals due to starvation and cold.

"Dzud is impacting almost all the herders in this region. Winter started early and we had heavy snowfall already in November. Since January, I've lost 22 cattle and around 30 goats and sheep,” she says.

Uranchimeg Terbish is afraid she will lose even more animals if the cold weather persists in the coming months.

“Most of my livestock are already weak and exhausted. In the spring, when the animals start to give birth, they become even more vulnerable. I don’t have enough hay and fodder to feed them and keep them alive,” she explains.

Under the IFRC appeal, each family will receive an unconditional cash grant of 245,000 Mongolian Tugrik (100 Swiss francs) to be used to purchase food, clothing, fodder for their livestock, or for any other priority they see fit. The appeal will also support a range of health interventions and initiatives designed to prepare herder communities against future Dzuds.

“Livestock is the only source of food, transport and income for almost half of the Mongolian population and we have to act now to help herders survive over the coming months,” explains Madame Nordov Bolormaa, Secretary General of the Mongolian Red Cross.

This is the second successive year in a row that Mongolia is experiencing Dzud. Last year’s disaster caused the death of over one million animals.

“We are concerned that we will see a repeat of last year when many herders sold their animals while they were still alive and oversupply of livestock resulted in very low market prices,” explains Gwendolyn Pang, Head of the IFRC’s Country Cluster Support Team in Beijing.

“Families with fewer animals to sell are particularly vulnerable. Many will lose their livelihoods and will have no choice but to migrate to slum areas on the outskirts of Ulaanbaatar and other urban centres where they will face great social and economic hardship”.