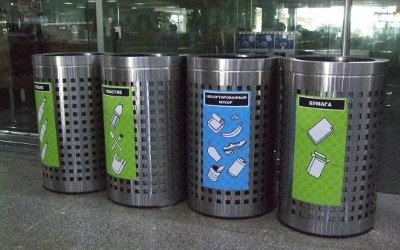 Pilot project on separate waste collection in regular schools of Bishkek being realized in frame of the project “Bishkek solid waste management improvement”, financed by European bank for reconstruction and development and European Union. Pilot project has started in the end of 2016 and embraced 66 regular schools in Bishkek city, the EU Delegation said in press release.

Fifteen volunteers were involved to the project. In September-October of 2016 in cooperation with Educational Management Department of Bishkek City Administration 91 presentation/meetings were organized with participation of 4314 people, who have been provided with 140 thousand information bulletins for pupils, as well as 4500 presentations on actual topical subject for school teachers.

The main objectives of the project are self-awareness and self-organization growth of young townsfolk, protection of environment, promotion of saving natural resources and reducing the level of pollution through separate waste collection.

Project initiators believe that involving children and youth to this activity through separate waste collection with their subsequent processing will bring to careful attitude to environment in the future.

Today, on May 25, in regular school # 53 on “Last Bell” event was held an official ceremony on awarding of winners on interim results of Pilot project on separate waste collection in Bishkek schools with participation of Bishkek city vice-mayor Erkin Isakov, representatives of Educational Management Department, European bank for reconstruction and development and European Union.

The first place according to the amount of collected scrap paper and plastic was taken by regular school # 53, second and third places were shared by regular schools # 56 and # 33.  Pleasant prizes awarded to the winners: Ping-Pong tables, set of soccer, volleyball and basketballs, 150 movie tickets, ecological drinks from “Shoro” company and confectioneries.

Pilot project on separate waste collection in Bishkek schools will continue until the end of 2017.