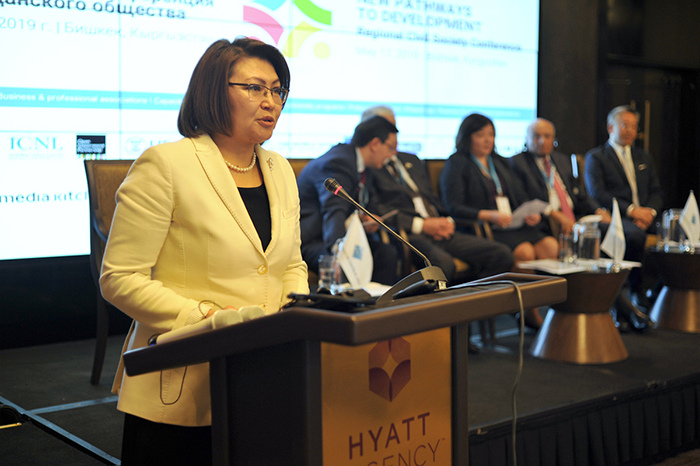 AKIPRESS.COM - The first of its kind in the last decade, the Civil Society Initiative of the University of Central Asia (UCA) organised a regional conference on “New Pathways to Development” in Bishkek on 17 May 2019. It provided a platform for key stakeholders – government, members of parliament, civil society organisations, corporations, and researchers – to discuss and debate new approaches to foster the growth of a vibrant civil society. Over 150 attendees from 12 countries participated in the Conference.

Altynai Omurbekova, Vice-Prime Minister of the Kyrgyz Republic, while delivering the opening address stated that the “Government is making strong efforts to engage civil society into the decision-making processes, by creating an enabling environment through legislation and regulatory mechanisms, including the use of information technology.”

The Plenary session featured speakers giving an assessment of the overall state of civil society in the region. They included representatives from Kazakhstan’s Ministry of Information and Social Development, Tajikistan’s Parliamentary Committee on International Affairs, the World Bank Mission in Kyrgyzstan, the US Ambassador to the Kyrgyz Republic, and the Chairman of the Board of Trustees of UCA.

Bobur Bekmurodov from ‘Yuksalish’, a civil society initiative in Uzbekistan, noted that UCA’s regional forum offers a unique opportunity to learn from global experiences that can find practical application in the work of countries aiming to build a vibrant and effective civil society.

The Conference panel sessions discussed: the use of digital technologies in the social sphere; open data as a tool for civic dialogue; citizen-created city spaces; and open government participation. One panel featured a speaker from Uzbekistan on feminism in Central Asia, and another on the experience of ‘Muttakallim’, an Islamic women’s union in Kyrgyzstan, promoting women’s engagement in civic life, education, social advancement, and diversity. Promoting indigenous philanthropy was discussed by a number of speakers, including the Executive Director of WINGS, a Brazil-based international organisation promoting social investment, who observed that “It is thrilling to see the key role universities can play as honest brokers in leading and promoting philanthropic ecosystems in their countries.”

Universities in the region have been largely uninvolved in civil society development, noted UCA’s Chairman of the Board of Trustees, Dr. Shamsh Kassim-Lakha. “However, universities have a critical role to play in this sphere – providing knowledge and skills, and cultivating responsible, active, and compassionate citizens who are engaged in the development process.”

The Civil Society Initiative (CSI) of the University of Central Asia, as its Director Dinara Musabekova noted, “was launched in 2017 with the support of the Aga Khan Foundation USA (AKF USA), and its first effort involved extensive research and regional consultations on key issues to formulate a plan of action going forward. This Regional Conference, which was also funded by AKF USA, provided valuable input for CSI, as a university-based programme serving a broad spectrum of civil society actors.”