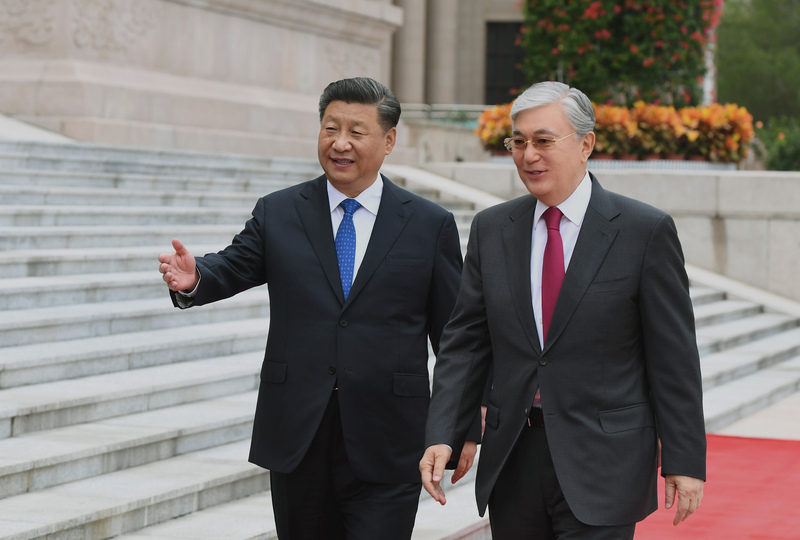 
The President of Kazakhstan noted that he was happy to meet again with the Chinese leader a few months after the Shanghai Cooperation Summit held in Bishkek. Expressing gratitude for the hospitality, Tokayev conveyed greetings and best wishes from his friend, the First President of Kazakhstan Nursultan Nazarbayev to the President of China.

“Our meeting takes place on the eve of the 70th anniversary of China. This is a very big historical date. I would like to take this opportunity to congratulate you and the people of China on this date. China has approached this anniversary with great success in socio-economic and political development. I believe that this event is of great historical importance not only for the People's Republic of China, but also for the whole world. The whole world is watching the development of your state with great attention,” the Head of State underscored. According to Tokayev, the 70 year path has been very difficult for China, but thanks to the reforms that were launched in the late 1970s under the leadership of Deng Xiaoping, the Chinese people have made tremendous progress in their development.

“We believe that China's success is a serious basis for the development of cooperation between our countries. Today we will sign a Joint statement confirming that Kazakhstan and China will develop a long-term, strategic, comprehensive partnership. This agreement, reached at the highest level, is a solid legal and political basis for our further cooperation,” the President of Kazakhstan stressed.

In his welcoming words, Chinese President Xi Jinping stressed that Kazakhstan is a major country in Central Asia and has a great influence in Central Eurasia.

“Under the leadership of the First President of Kazakhstan Nursultan Nazarbayev, your country has achieved impressive success, created a model of development with national specifics. When you became President, you proclaimed the three principles of your policy - continuity, justice and progress. Your goals are to develop the economy, create jobs, combat corruption, and increase the level of social protection. All these meet the aspirations of the people of Kazakhstan. All your undertakings are aimed at it. I wish the friendly people of Kazakhstan well-being and prosperity,” the Chinese leader said.