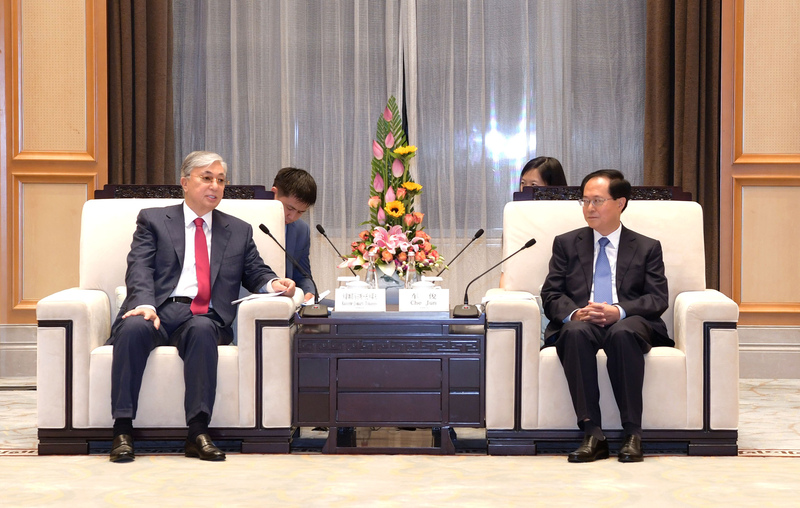 AKIPRESS.COM - President Kassym-Jomart Tokayev met with Che Jun, Secretary of the Zhejiang Provincial Committee of the Communist Party of China, during his visit to China, Akorda said.

The President thanked the leadership of Zhejiang province for the warm welcome and noted the dynamic development of the People's Republic of China.

Tokayev stressed that the relations between our countries have reached the level of strategic partnership, which will receive a new impetus by the agreements reached during this state visit.

“Strategic partnership, which, in fact, is eternal, involves a wide range of areas of mutual cooperation. We continue the work started by our First President Nursultan Nazarbayev and Chinese leaders. We will cooperate in the economy, politics, including regional security issues, as well as in the cultural and humanitarian sphere,” the Head of State underscored.

Tokayev called China's achievements in the digital economy as impressive and noted that he deliberately picked Zhejiang province as the point of his visit in order to get acquainted with the best practices.

“Hangzhou is well-known as the cradle of Chinese culture. Today this city has become a world center of high technologies, the largest companies work here. It was in this city that the Head of China Xi Jinping once worked, who nurtured and implemented his successful ideas here,” the President of Kazakhstan noted.

In turn, Che Jun informed about the readiness of the province to increase economic and cultural ties with Kazakhstan.