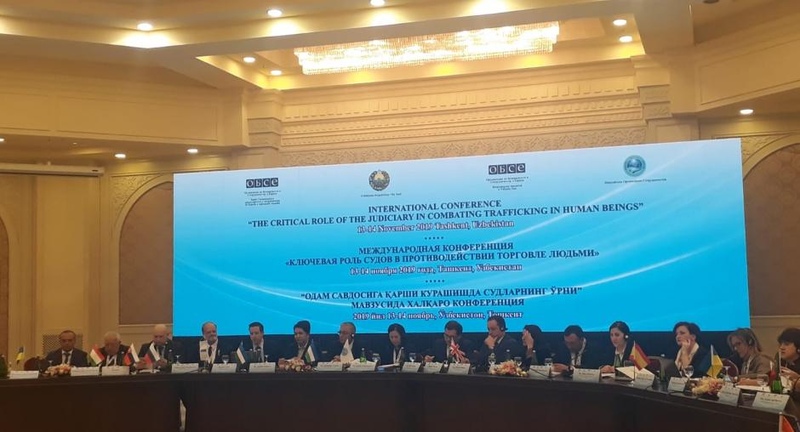 AKIPRESS.COM - Judges of the highest criminal courts from 23 countries gathered for a two-day OSCE-wide conference on the role of the judiciary in combating trafficking in human beings that concluded on November 14. The participants discussed current human trafficking-related challenges and ways to foster the implementation of OSCE commitments. Strengthening the role of the judiciary as a part of the criminal justice system as a way to effectively combat trafficking in human beings was also discussed.

OSCE anti-trafficking principles, such as the effective application of victim-centred and trauma-informed approaches, the non-punishment principle, the abuse of a position of vulnerability as well as emerging issues in the judicial response to human trafficking and their connection to national case law were among the topics of discussion.

“In recent years, significant progress has been made in implementing the provisions of the Protocol to Prevent, Suppress and Punish Trafficking in Persons, Especially Women and Children. So far however, it has not been possible to completely end impunity for these crimes. Only co-ordinated actions and joint efforts will help us counter this crime," said Kozimdjan Kamilov, Chairperson of Uzbekistan’s Supreme Court.

“This international conference is an important step in our continuous effort to uphold the rule of law and provide a platform for dialogue on international judicial co-operation. Such co-operation is vital in addressing this global security challenge with a view of ensuring a harmonized approach to eradicate human trafficking,” said Valiant Richey, the OSCE Special Representative and Co-ordinator for Combating Trafficking in Human Beings.

“Judges must advocate for justice. It is therefore particularly important to understand the criminal enterprise of human trafficking, especially with regard to its link to money laundering and other related crimes,” said John MacGregor, OSCE Project Co-ordinator in Uzbekistan. “Supreme courts could provide a critical leadership in setting the model guidelines for the lower level courts and improving collaboration as well as the development of a training curriculum to help judges to better understand human trafficking crimes”.

The conference was organized by the Office of the OSCE Special Representative and Co-ordinator for Combating Trafficking in Human Beings, the Supreme Court of the Republic of Uzbekistan, the Shanghai Cooperation Organization and the OSCE Project Co-ordinator in Uzbekistan, in co-operation with other OSCE field operations.