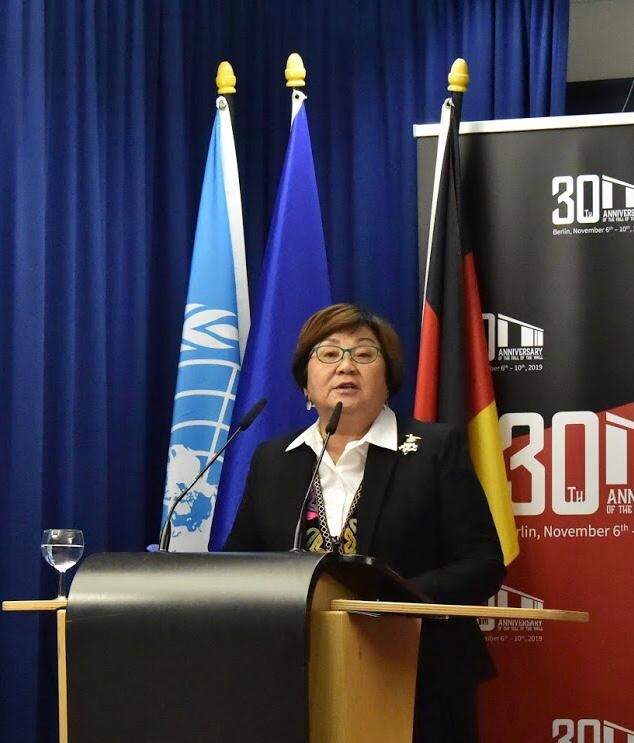 AKIPRESS.COM - Remarks by Roza Otunbayeva, former President of Kyrgyzstan, at the Berlin Wall 30 - From the Divided to the City of Freedom, the 30th Anniversary of the Fall of the Wall

Being here today to speak and celebrate together with all of you is truly a great honour. I appreciate this opportunity to reflect and share my thoughts and emotions about one of the most epochal event of our lifetime.

The 30 years Anniversary of the Fall of the Berlin Wall is being marked not only here in Berlin but indeed all around Europe and the whole world.

The Berlin Wall - was the very physical embodiment of the Iron Curtain - and within days after it was torn down - historical changes spread like fire or, rather, like falling dominoes, first all across Central and Eastern Europe and then via the Baltics and the Caucasus they shook the walls of the Kremlin and brought about the fall of the Soviet Union itself. Extraordinary shifts in geo politics in many far flung corners of the world, many as remarkable as those in Chile or South Africa, perhaps, inevitable in their nature, but still they were unquestionably hastened to occur much sooner because of the events 30 years ago in Berlin.

The fall of the Berlin Wall transformed the course of world history and changed the lives of hundreds of millions of people around the world. It most certainly changed my life. Thirty years ago I was the only female member of the tight knit collegium - top governing board of the Ministry for Foreign Affairs of the USSR. One of the leading Face and Voice of Perestroika, the Soviet Foreign Minister Eduard Ambrosievich Shevarnadze has promoted me from a party post in the Soviet Kirghizia among other responsibilities to represent the USSR in UNESCO.

In those days the wind of change was blowing to Berlin from Moscow. I remember how we thought of Honecker and other comrades in GDR as retrogrades, not embracing the New Thinking presented to the world by our charismatic leader Gorbachev or Gorby as he was known in the West. Perestroika and Glasnost were transforming the Soviet Union and with it the new World Order was to be arranged by the sheer will and magic of the series of summit meetings with the US presidents. Little did we know, of course, that soon the winds would circle the planet and become the cyclone, out of control of the Politburo.

I want to credit the work of number of my than colleagues A.Bondarenko, V.Terehov, Y.Kvitcinskyi, leading German and European experts at the Soviet Foreign Ministry. Most of the reports from Berlin, very thorough analysis of the events in the satellite countries we receiving in those days were detailed and accurate.

The question: did the Soviet Union at that point of November 1989 have much of a policy choice in Berlin is subject of another debate. I do know for sure and until now we keep read a lot of memoirs – a very tense work on the future of Germany, of Europe, on the future of the World went during the intensive shuttle negotiations between USSR and Germany, within the framework 2 plus 4.By the end of 1989 everyone who was not blind and not death got clear feelings – history has accumulated 100 years in 100 days.

Die Selbstbestimmung of Germans in Eastern Germany took place! It was very important that inevitable changes in GDR went without bloodshed, that country will be kept from the fall into chaos. By Gorbachev the exictenz of two sovereign German states is a fact of specific of the world postwar development, history should say its verdict: by his forecast it will be worked out during the next 50-100 years (?!). This days it is amusing, in contrast to read that the borders were actually suddenly opened by a  mistaken press release of the GDR authorities.

In any case, I do want to take time to greet and congratulate Germany - the whole of Germany - on the tremendous success of its unification. I do not agree with all the press that focuses on the divisions and regrets and continuing differences between the West and the East. Thirty years is historically a very brief period. Unlike “fears” of leading politicians in the late eighties like Thatcher the reunited Germany has never posed a threat neither to its neighbors in Europe nor in the Global world. The reunited Germany has been and stays – despite the costs of “Wiedervereinigung” – a major donor of development assistance in the world.Modern Germany has many reasons to be proud. But the success of the unification is best showcased by the fact that the most powerful European, most influential woman in the world today and one of the most consequential German leaders of the post-war period - current Bundeskanzlerin Angela Merkel - comes from the East. I want to wish Frau Merkel my warmest congratulations on the most remarkable leadership displayed by her over the last 15 years. The world will feel less stable without her stable and looked after without her steadfast commitment and rational vision.

Yes, 30 years ago the Democratic Awakening was gaining confidence in my home country Kirgizia as well. Two years later we were catapulted to our own independence, with the Soviet Union no more.

Independent Kyrgyzstan went through many challenges and changes. Kyrgyzstan is today the most democratic, most open and reform minded country in Central Asia. A big part of them was losing around a hundred thousand of our ethnic Germans and Jews who emigrated from Kyrgyzstan to Germany. But we are happy that these new Germans still cherish their ties with the country of their birth. The latest example came with the two or even three German-Kyrgyz football players who play for our national team.

We are following of course, with great interest the fascinating debate in the international academia and policy circles who was right back in 1989? It was amazing to read the series of articles in the New York Times who almost concided that Deng Xiao Peng was right in putting down the student protests in June 1989 on the Tiananmen square. The tremendous achievement of the Communist Party of China that lifted in such a short historical period one billion people from dire poverty – has no analogues in history. And they are not yet done. China is only gaining speed on its way on smashing every possible record in infrastructure development, production, science, and yes, military buildup.

Today the public opinion of Russia blames almost universally Michail Gorbachev for being too romantic and naïve, and letting the winds of change blow too hard in such a short time. Dear Friends,History did not end with the fall of the Berlin Wall, as it was once announced by Francis Fukuyama. History continues. We see it most vividly in the current challenges and the recent round of powerful shifts, some very sudden, some of tectonic nature, in the balance of power and influence among the world players, large and small. The winds of change are blowing again. I want to conclude by expressing confidence that - no matter what changes in geopolitics or technology or culture - one great human quality will remain the most powerful and will continue to shape the destiny of the nations around the world - it is the YEARNING FOR FREEDOM - of the same nature and example that was so vividly demonstrated by citizens of Berlin 30 years ago.

That’s why we can all say: Wir sind alle Berliner!