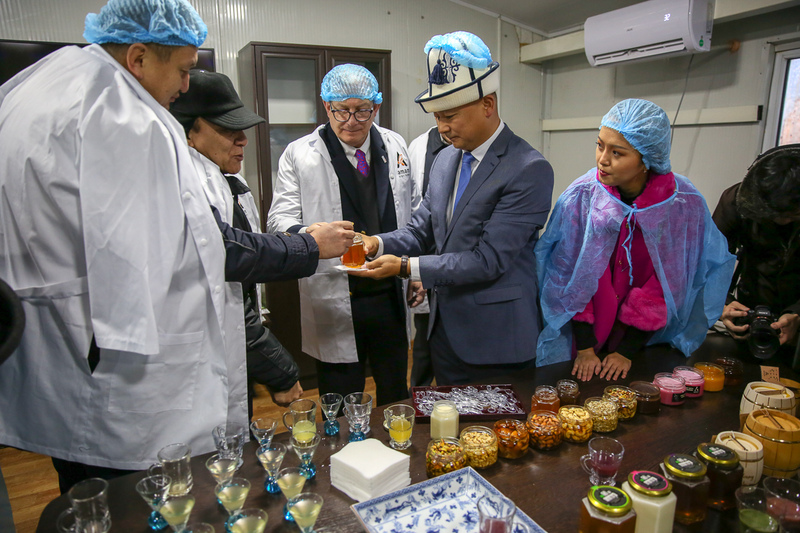 AKIPRESS.COM - The United States Agency for International Development (USAID) has donated new and modern equipment to the Aman GreenFood LLC company, a Kyrgyzstani business specialized in the production of natural honey and honey-based products.

The donation will allow the company to automate and increase its production, improve safety standards, and reach new markets.

For 2019, the company is recording export orders to the United States totaling 12 tons. Its products are already being sold in Walmart stores, one of the largest retail chains in the United States.

During the event USAID Deputy Assistant Administrator for South and Central Asia Mr. Javier Piedra noted that Kyrgyz honey is one of the best in the world. “And if I understand correctly, 20 additional tons are going to be exported to the U.S., so even more of my compatriots can enjoy Kyrgyz honey” said Mr. Piedra.

The donation that includes lap equipment that will help the company to meet International Organization for Standardization (ISO) certification standards and begin exporting to European and other markets with stricter food import rules.

“One of the key features of this facility is the new lab which can test all characteristics of honey and identify the proportion of each type of flower used by bees to make honey. This is considered first of its kind in Kyrgyzstan” said Mr. Kadyr Aly, owner of Aman GreenFood.

USAID’s contribution to Aman GreenFood’s expansion is resulting in the creation of several new factory jobs. It will also benefit six large beekeeping cooperatives and other individual bee-farms including up to 1,200 individual beekeepers who will be able to rely on a stable buyer.

Aman GreenFood was established in 2013 and processes natural honey for sale domestically and in other countries. Aman GreenFood has stable markets and export sales mainly focused on the U.S., Japan, Korea, China, and Gulf countries.

USAID’s contribution was provided through its Enterprise Competitiveness Project, a $22.7 investment over five years designed to accelerate sales growth and job creation among Kyrgyzstani small and medium enterprises.