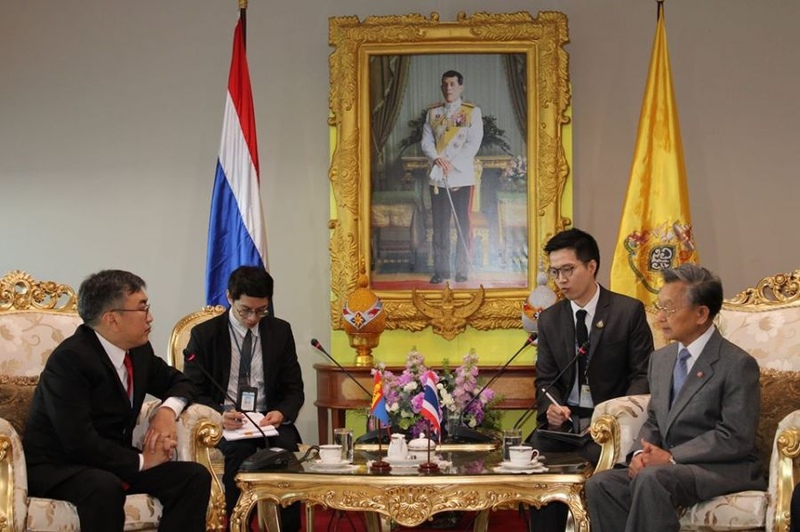 AKIPRESS.COM - Ambassador of Mongolia Tugsbilguun Tumurkhuleg paid a courtesy call on H.E. Mr. Chuan Leekpai, President of the National Assembly of the Kingdom of Thailand and Speaker of the House of Representatives, Montsame reported.


During the meeting, the Ambassador extended his congratulations to His Excellency Mr. Chuan Leekpai on his election as President of the newly-formed National Assembly of Thailand and Speaker of the House of Representatives and expressed his confidence that during his term-in-office, traditionally friendly cooperation between legislative bodies of the two countries and their secretariats would be more expanded. Ambassador T. Tugsbilguun also expressed his hope that a new Thailand-Mongolia Parliamentarians Friendship Group at the Thai House of Representatives would be formed soon.

On his turn, H.E. Mr. Chuan Leekpai noted that this year marks the 45th anniversary of establishment of diplomatic relations between Mongolia and Thailand and pledged his attention to broadening the bilateral relations including cooperation between parliaments of the two countries.

Moreover, H.E. Mr. Chuan Leekpai, President of the National Assembly of Thailand recalled warmly that in his capacity as Prime Minister of Thailand he received the first President of Mongolia, His Excellency Mr. Punsalmaagiin Ochirbat on his official visit to Thailand in 1994 and requested to convey his greetings to H.E. Mr. Gombojavyn Zandanshatar, Chairman of the State Great Hural /Parliament/ of Mongolia.