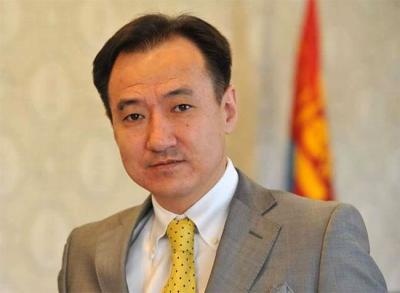 
Wang said this year marks the 70th anniversary of the establishment of diplomatic relations between China and Mongolia, adding that the two countries have successfully held a series of celebration events.

Bilateral exchanges and cooperation in various fields have taken on a new look, and the China-Mongolia comprehensive strategic partnership has maintained a positive momentum of development, he said.

Wang said both sides should work together to carry forward the fine tradition of mutual trust and mutual support, deepen pragmatic cooperation, and accelerate the projects aimed at improving people's livelihood, so that the China-Mongolia ties can better benefit the two peoples.

For his part, Tsogtbaatar said Mongolia and China have held grand events this year to celebrate the 70th anniversary of the forging of diplomatic relations, giving a strong boost to the ties.

The two sides have maintained close high-level exchanges and two-way trade volume has reached a new high, he said.

Tsogtbaatar said Mongolia firmly adheres to the one-China policy and stands ready to make joint efforts with China to lift the comprehensive strategic partnership between the two countries to a new level.