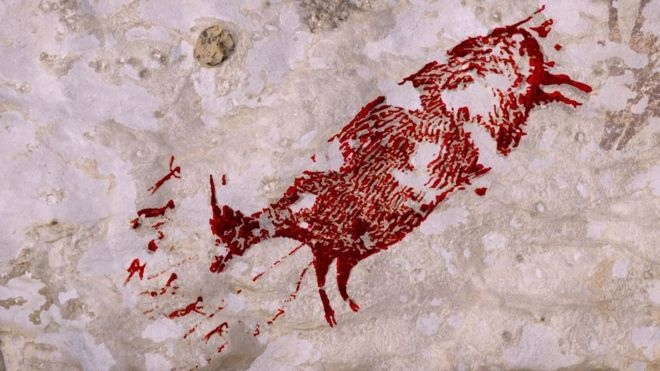 AKIPRESS.COM - A painting discovered on the wall of an Indonesian cave has been found to be 44,000 years old.

The art appears to show a buffalo being hunted by part-human, part-animal creatures holding spears and possibly ropes.

Some researchers think the scene could be the world's oldest-recorded story.

The findings were presented in the journal Nature by archaeologists from Griffith University in Brisbane, Australia.

Adam Brumm - an archaeologist at Griffith - first saw the pictures two years ago, after a colleague in Indonesia shimmied up a fig tree to reach the cave passage.

"These images appeared on my iPhone," said Mr Brumm. "I think I said the characteristic Australian four-letter word out very loud."

The Indonesian drawing is not the oldest in the world. Last year, scientists said they found "humanity's oldest drawing" on a fragment of rock in South Africa, dated at 73,000 years old.