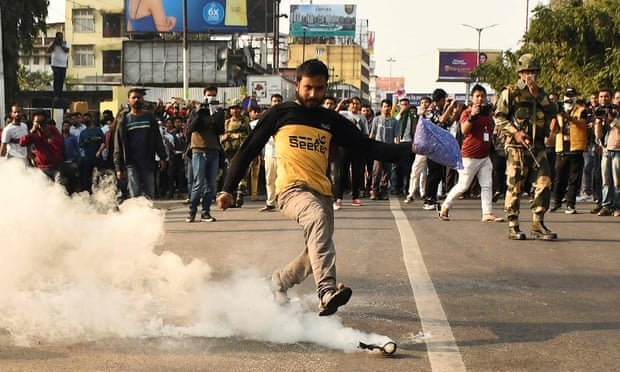 AKIPRESS.COM - Two protesters have been shot dead by police in the Indian state of Assam during unrest over legislation that will allow for Hindu but not Muslim migrants from Bangladesh, Pakistan and Afghanistan to become citizens of India, Guardian reports.


The citizenship amendment bill (CAB), passed by the parliamentary lower house on Monday and by the upper house on Wednesday night, has faced fierce opposition from indigenous people in the north-eastern states of Assam and Tripura.

Protesters in Assam fear giving citizenship to Hindu and other immigrants from Bangladesh will place a burden on their resources and put the traditional Assamese way of life at risk, while many are also opposed to the openly discriminatory and anti-Muslim nature of the bill.

Tens of thousands of people took to the streets of Assam’s capital, Guwahati, on Thursday, defying a government imposed curfew. There were violent clashes with special forces and police, who fired teargas as protesters burned cars and tyres, pulled down political billboards and setting a bus terminal and two trains alight.