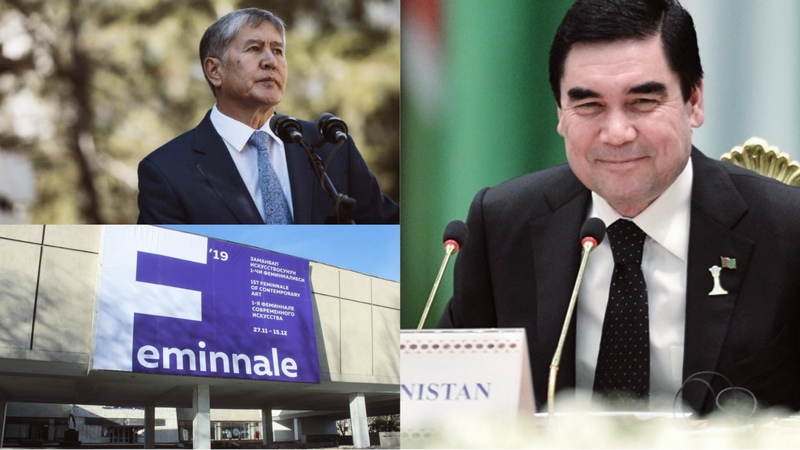 AKIPRESS.COM - With the new year's quickly approaching, it's the time of the year to remind our readers Top 10 most read news of AKIPRESS.COM in 2019:

Former president of Kyrgyzstan Almazbek Atambayev was detained on August 8, 2019 in second storming of his house in Koi-Tash village outside Bishkek. Clashes between the SWAT soldiers and supporters of Atambayev occurred in his home on August 7 evening.

The Parliament of Kyrgyzstan stripped Atambayev of his immunity from prosecution on June 27. Atambayev was accused of illegal freeing of crime boss Aziz Batukayev from prison, concealment of income, corruption, power abuse.

Several news agencies, including Russian ones, reported about death of President Turkmenistan Berdimuhamedov on July 21, 2019.

Following the reports, Ambassador of Turkmenistan to Kyrgyzstan Shadurdy Meredov denied the rumors about Berdimuhamedov's death.

Danish artist appeared naked at the 1st Feminnale of Contemporary Art international exhibition at the Gapar Aitiev Museum of Fine Arts in Bishkek in November. The nude performance sparked a wide outrage that it led to firing of the museum director.

Ulaanbaatar improves its position in most polluted cities ranking

Ulaanbaatar was moved from the top 10 most polluted cities in the world from the fall of 2019.

The Mongolian capital has been one of the most polluted cities for a long time. The situation has improved in 2019.

According to Greenpeace and AirVisual, 22 out of 30 most pollutted cities in the world are located in India. The first positions in the ranking belong to Gurgaon, India, which is home to 900,000 people followed by Lahore (Pakistan), Dhaka (Bangladesh), Djakarta (Indonesia), Mumbai (India), Ho Chi Minh (Vietnam) and Tehran (Iran).

The Japan national football team arrived in Bishkek for the World Cup qualifier match against Kyrgyzstan on November 14. Kyrgyzstanis were defeated by Japan 0-2.

But before the match, Japanese footballers stunned fans after they cleaned their boots after training at the stadium Dordoi FC in Bishkek. They also cleaned the lock room.

Aisultan Nazarbayev reportedly tried to commit suicide in London on June 5 threatening police to jump off the height.

"The grandson of Kazakhstan’s president bit a police officer as he tried to stop him killing himself, a court heard. Aisultan Nazarbayev, 28, is accused of attacking PC Ross Sambrook after he was found in a stranger’s flat on June 5,"  Court News UK said.

Southwark Crown Court heard police had been called to Nazarbayev’s hotel two days earlier after he climbed onto the balcony and threatened to jump.

In September 2017, Aisultan Nazarbayev confessed on his Facebook page to using drugs after his father Rakhat Aliyev died.

Uzbekistan wins The Economist’s country of the year award

Uzbekistan has won the “country of the year” award from The Economist. The edition annually awards the states achieving the biggest progress in democracy.

The selection criteria include not the financial situation, influence, cuisine of the country, but the improvements the country demonstrated.

Three years ago Uzbekistan was a closed society run with exceptional brutality and incompetence. Legions of men, women and children were brought to cotton fields on harvest season.

The Economist said after dismissal of the State Security Service Chief in 2018, reforms were started that accelerated during the last year.

Manchester United were beaten by Astana in their penultimate match of the Europa League group stage campaign  2-1 on November 28 in Nur-Sultan, Kazakh capital.

Ole Gunnar Solskjaer gave three youngsters full debuts with Ethan Laird, Dylan Levitt and Di'Shon Bernard all getting their first starts and Largie Ramazani, Ethan Galbraith and D'Mani Mellor were all given chances off the bench.

Access to Telegram and WhatsApp messengers in Kazakhstan was blocked on June 11, 2019.

Telegram messenger went down on the snap presidential election day. Problems with WhatsApp occurred for the first time in the country.

"The Kazakh have ancient tradition of "spitting in mouth" when a famous, respected person spits in a baby's mouth so that the baby "caught popularity and talent," the authors of the video wrote.

"It may sound weird, but the tradition is innocent, and many parents would want famous people to infect their children with popularity and talent," they wrote.

25-year-old Dimash gained significant popularity in Kazakhstan and other post-Soviet countries in 2015 upon becoming the Grand Prix winner of Slavianski Bazaar in Vitebsk, Belarus. He rose to fame in China with his participation as a "wildcard competitor" in Hunan TV's Singer 2017.