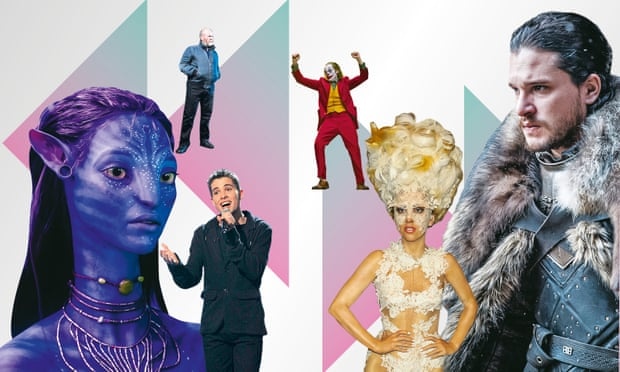 AKIPRESS.COM - To see how far we have come in the past 10 years, The Guardian venture to the first week of 2010, a strange time when blue aliens and beige X Factor stars roamed the Earth.

At the beginning of the decade, Avatar was at the top of the box office in the UK, the US and numerous other territories. It looked like the shape of things to come; now it’s as much the shape of things that went. And not just in terms of Sam Worthington’s career. James Cameron’s futuristic epic literally changed the landscape – to that of a wondrous alien planet, unlike anything we’d ever seen before. So immersive were Avatar’s 3D vistas that we forgave the blue cat people and declared this to be the future of cinema. Suddenly, all big movies had to be made in 3D, and cinemas had an excuse to jack up ticket prices accordingly. For a time it worked, until we realised 2D was immersive enough, and cheaper.

In other ways, though, Avatar really did set the bar for the 2010s. Cameron has always excelled at applying technology to action cinema, and Avatar really showed what was possible with CG rendering, performance capture, green screen and all the other tricks. Now that is what we expect every time. Scan the list of highest-grossing films of the decade and it is all CGI-heavy and/or action-driven spectacle until we get to Joker at No 30. Avatar’s $230m budget was outlandish at the time; now such gambles are routine.

Innovations aside, Avatar’s hokey mythologising does look old-school, but the story tackled some prescient themes: ecosystems imperilled by rampant capitalism; human identity as transferable data; dissolving of boundaries between lived and virtual experience; western imperialism examining its own engagement with other cultures – albeit via a white, male saviour who turns out to be better at everything than the natives. Indeed, for all that the decade elevated women and people of colour, we would be seeing many more heroic white guys in the years that followed.

Where Avatar arguably failed was in capitalising on its spectacular success. More than any other decade, the 2010s have been an era of familiarity: sequels, remakes, brands. The movies that really defined the decade were Marvel’s cunningly interconnected Avengerscycle. By contrast, Avatar has left remarkably little impact on the cultural landscape. Nobody named their babies Neytiri or Eytukan, memes of Jake Sully shouting “This is our land!” remain uncirculated, and while the Force is part of the language, who remembers the name of the Na’vi mother goddess?” (It was Eywa – thanks Wikipedia). If the best we can say is that Avatar’s giant technological leaps paved the way for more “movies where people look like animals”, such as Cats, then that’s not much of a legacy.

Things could change if and when Cameron finally grinds out the multiple sequels he promised (it feels as though Avatar 2 has been coming “next year” since about 2011), but 10 years on, Avatar feels like a different planet.

The decade in music started with a whimper. Joe McElderry, the winner of the sixth series of The X Factor, then still in its ratings prime, had become the victim of a Facebook campaign (remember those?) to reinstate authenticity into the race for Christmas No 1. The resulting furore meant his cover of Miley Cyrus’s The Climb was kept off the top spot by Rage Against the Machine’s Killing in the Name. A week later, his take on a song originally released just nine months earlier – all prophetic lyrics about struggling to overcome life’s uphill battles – landed the first chart-topper of a new decade. However, it felt like a consolation prize rather than the start of something, with McElderry eventually dropped by Syco in 2011 after his third single peaked at 68.

The muted success – an X Factor winners’ single had taken the Christmas top spot every year between 2005 and 2008 – also represented a turning of the tide when it came to The X Factor’s pop culture dominance, with the public growing bored of cynically being force-fed sickly sweet covers with their turkey dinners.

You could argue, however, that McElderry did leave his mark, with his malleable, just-happy-to-be-here ordinariness ushering in the swath of bland subsequent X Factor winners such as Matt Cardle, Ben Haenow and Matt Terry; a trio of varying shades of beige that in turn also reflected a new pop landscape headlined by Ed Sheeran.

That The Climb would subsequently be knocked off a week later by Lady Gaga’s ludicrous, turbo-charged banger Bad Romance – a song that had already spent a week at No 1 in late 2009 after a performance on the X Factor that involved her dancing in a giant bath while dressed like a bat – only serves to highlight so much of what has changed since 2010. While pop stars such as Ava Max and newcomer Alice Chater have tried to replicate the slightly trashy, kitchen sink-esque sound of Gaga’s Fame Monster era, and the fantastical imagery that went with it, it is telling that even Gaga seems to have given in to the scourge of “relatability” that has swept through pop, introduced firstly by TV talent shows then the rise of social media.

In fact, you could argue that Gaga has spent the majority of the latter half of the decade crafting her own variations of The Climb’s country-tinged, homespun authenticity via 2016’s Stetson-wearing Joanne and last year’s A Star Is Born, a film that essentially punishes her character for being a pop star rather than a guitar-wielding authentic musician. Rumours are that Gaga’s next album will see a return to full-throttle electropop, a move that would chime with a bubbling undercurrent of boredom at music’s current streaming-era stasis. New decade, old Gaga? It’s the climb.

The most-watched show at the start of 2010 was EastEnders, barging into the new decade with the brassy confidence of an Albert Square pub matriarch. Archie Mitchell had just been bludgeoned to death with the Queen Vic bust, and Syed’s secret love for Christian was set to ruin his wedding day, in a New Year’s Day episode that brought in 12 million viewers. Now, EastEnders routinely pulls in less than half those numbers, and this year saw the lowest viewing figures ever. It hasn’t hit the 10 million mark since 2015, and it’s not the only soap to struggle. Back in 2010, Coronation Street brought in nearly 15 million viewers, but now has a third of that.

Soap operas were born out of the radio dramas that entertained housewives as they went about their chores during the day, and they boomed as they moved to TV. Back in the glory days, when there were only four channels and EastEnders was the edgy young disruptor in soapland, 30 million people watched Dirty Den serve Angie with divorce papers for Christmas. But now, with only a third of people watching soaps live, and prestige TV such as Game of Thrones eating up our downtime, viewers’ loyalties are torn.

There has been a shift in the style of gritty reality audiences expect from TV, too. There is still a demand for “normal people” on screen, but perhaps with a more aspirational filter. When constructed reality boomed in the middle of the decade, the storylines followed melodramatic soap tropes, with a feeling of watching the people’s everyday lives. But against of all of the “reality” they profess to capture, shows such as Made in Chelsea and Love Island offer escapism, as contoured characters with an endless supply of box-fresh clothes serve up an antidote to the bleakness of austerity Britain – a far cry from the kitchen-sink drama aesthetics and everyday grind of soaps.

Meanwhile, home-grown 9pm dramas that compete for the same terrestrial audience as soaps are strong ratings winners, whether that’s Killing Eve, Peaky Blinders or Line of Duty. These shows offer production values, name actors and time and space to tell their stories that soaps, with their weekly churn, would never be afforded. And high-quality reality TV shows with big budgets are even stronger. This year’s I’m a Celebrity... lineup pulled in 12 million viewers, and Strictly continues to thrive as event TV. Soaps are trying desperately to compete with watercooler TV: take EastEnders’ 30th-anniversary live week, or Hollyoaks’ exploration of far-right extremism.

Still, EastEnders starts 2020 with enough intrigue to propel it towards its 35th anniversary. As much as people complain about it, they’d miss it if it was gone. Like all soaps, perhaps it’s just finding its place in a changing TV landscape.