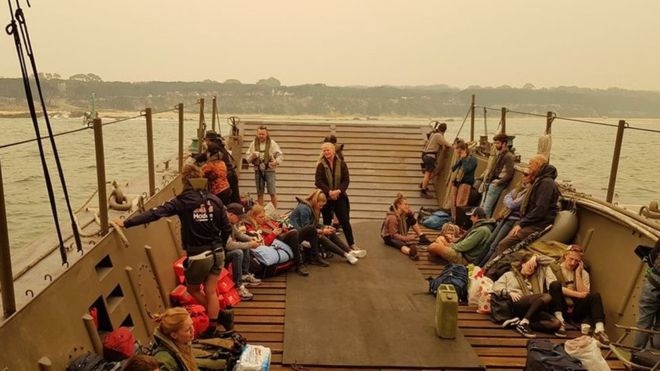 AKIPRESS.COM - The Australian navy has evacuated around 1,000 tourists and residents who were trapped in the fire-ravaged town of Mallacoota on the Victoria coast, BBC reports.

A local MP, Darren Chester, called it an "unprecedented mass relocation of civilians".

Some 4,000 residents and tourists fled to the beach on Monday night, when racing bushfires encircled the town.

The evacuees will be taken to Western Port, the navy said - around 16 hours' voyage down the coast.

With roads cut off, the military evacuated around 60 people by helicopter on Thursday. The air has so far been too smoky for further air evacuations.

The evacuation was voluntary. By Thursday night, 963 had signed up for the boats, with a few more doing so on Friday morning, Commander Scott Houlihan said.

The larger ship, HMAS Choules, has a "few hundred beds". Further trips are possible, depending on demand.

The evacuees were allowed to take their pets on the ship.