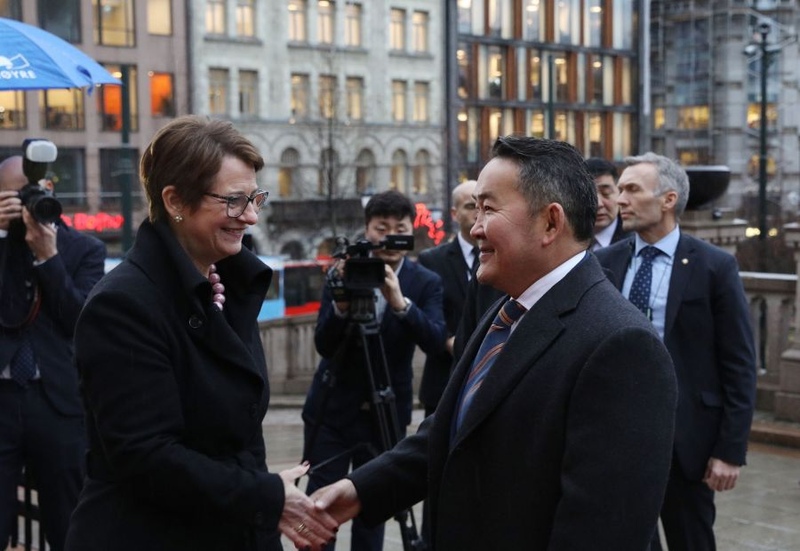 AKIPRESS.COM - President of Mongolia Khaltmaagiin Battulga, who is on working visit to the Kingdom of Norway, met with Ms. Tone Wilhelmsen Troen, President of the Storting of Norway, Montsame reported.


The head of state asked Ms. Tone Wihelmsen Troen to pay attention to the issues discussed during the visit at high level.

Especially, Mongolia is facing the need to carry out an article inserted in the Constitution on establishment of Wealth Fund and equal distribution of natural resources to every citizen through the fund. Therefore, the President re-affirmed the country’s proposals on learning from management of Wealth Fund of Norway and developing partnership on it.

“Since the Norwegians’ belief that natural resources belong to them has inseparable connection with the operations of the Norway’s Wealth Fund, we are ready to generously share our experience and knowledge on the establishment and successful operation of the wealth fund,” said Ms. Troen

Within it, the sides discussed broadly about sending Norwegian specialists, who took part in launching the operation of the fund and developing its management, to Mongolia and collaborate.

Moreover, they touched other issues including agricultural cooperation and development of winter sports in Mongolia and reached to mutual understanding on how to cooperate in the future at sectoral and high levels.

As the mass media were not included in the list of permitted activities during the state of emergency in Kyrgyzstan, AKIpress apologizes to its readers for reduced promptness and coverage of news.
Related content
President of Mongolia, PM of Norway discuss cooperation
President Battulga visiting Norway
Mongolia's Battulga meets Prime Minister of Singapore