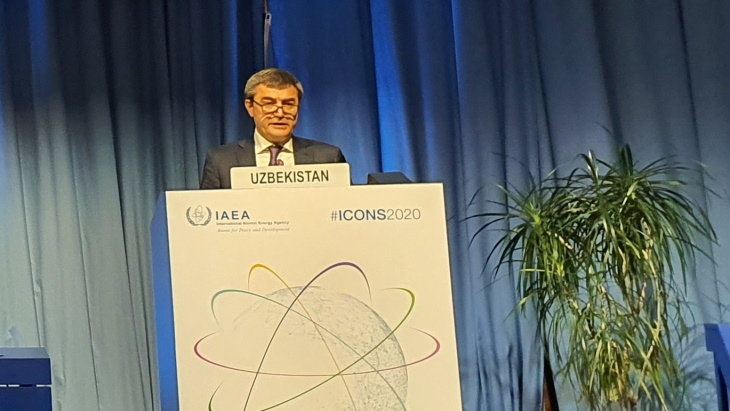 AKIPRESS.COM - A crucial aspect of developing nuclear infrastructure is the study of, and cooperation with, countries with both developed and developing nuclear capabilities, Alisher Sultanov, Uzbekistan’s energy minister, said today.

Speaking at the third International Conference on Nuclear Security - Sustaining and Strengthening Efforts, hosted by the International Atomic Energy Agency (IAEA) at its headquarters in Vienna, Sultanov said Uzbekistan is in talks on cooperation with regulators in Belarus, Finland, the UAE, the USA, and other countries. This cooperation, he said, builds on Uzbekistan's ongoing dialogue with regulators in Russia, World Nuclear News reported.

The Central Asian country became a member of the IAEA as long ago as 1994, has 50 years of experience in nuclear research and is one of the world's biggest producers of uranium. Despite its existing expertise in nuclear energy, Uzbekistan depends almost entirely on fossil fuels. About 86% of its electricity comes from burning gas, coal and oil, while the remainder comes from hydropower. It now has plans to build its first nuclear power plant, to help it keep pace with rising electricity demand and to cut its CO2 emissions.

"Uzbekistan is very busy developing its nuclear and regulatory infrastructure and we are proud to stand shoulder-to-shoulder with the IAEA both now and in the future, to ensure the safe development of our nuclear capabilities and the peaceful use of atomic energy worldwide," Sultanov said, according to a statement issud by his ministry.

Uzbekistan has requested the IAEA conduct an Integrated Nuclear Infrastructure Review and this will take place in October. It also has 15 seminars with IAEA experts planned for this year in Tashkent.

Work is under way to improve Uzbekistan's regulatory framework covering radiation and nuclear safety, which will draw on IAEA best practice recommendations, he said. Other initiatives include adoption of a human resources development strategy’ for its nuclear industry to embed a strict safety culture and ensure that its highly qualified personnel meet the requirements for the safe use of atomic energy, he added.

Uzbekistan and Russia signed an intergovernmental agreement on cooperation in the use of nuclear energy for peaceful purposes in December 2017, and in September 2018 a further agreement was signed for the construction by Russian state nuclear corporation Rosatom of two VVER-1200 reactors. These are to be commissioned in 2028 and 2030, respectively. In July last year, Sultanov announced the country wants to build four units and not just two as previously stated.