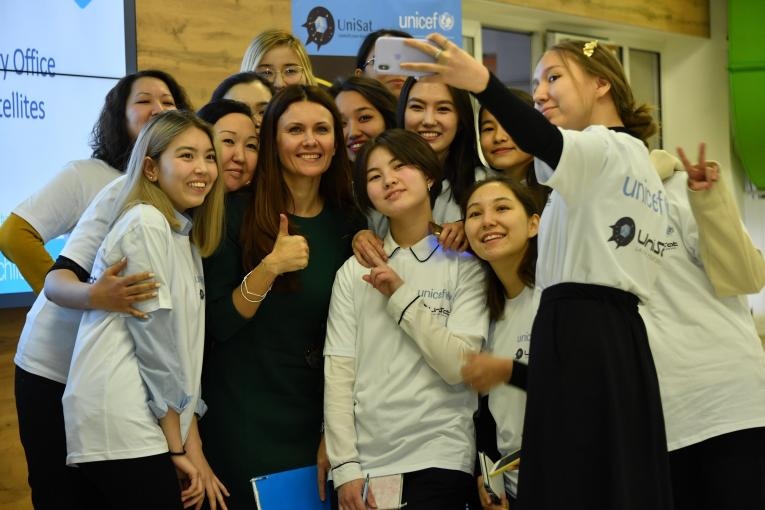 AKIPRESS.COM - The United Nations Children's Fund (UNICEF) and the Science and Technology Park of Al-Farabi KazNU launched an educational project for girls on the development of UniSat nanosatellites on the eve of International Women's Day.

The aim of UniSat project is to develop the knowledge and competencies of girls in the development of nanosatellites, as well as to improve such skills as teamwork, public speaking, time management and creativity, UNICEF said.

“Innovation and skills development among young people and the promotion of gender equality are very important for UNICEF. This year, the world celebrates 25th anniversary since the adoption of Beijing Declaration and Platform for Action to expand and promote the rights of girls and women. Despite the certain progress that has been achieved, almost every fourth girl from 15 to 19 years old in the world is not employed and is not involved in the educational process. We see opportunities to apply innovations to solve key global problems. Therefore, the participation of girls in the nanosatellite program is a step towards a new era for girls and women. We believe the UniSAT program results will allow achieving cosmic changes in society,” Veronika Vashchenko, UNICEF Deputy Representative in Kazakhstan, said at the opening ceremony.

As part of the UniSat project, 20 girls aged 14 to 35 years from different regions of Kazakhstan will undertake courses on the creation of a nanosatellite within five months in the Science and Technology Park of Al-Farabi KazNU. The course will cover such important stages of creating any spacecraft as engineering, design, programming, assembling, testing and launch. By the end of the project, the participants will create models of nanosatellites that will be launched into the upper atmosphere.

“The UniSat project is the first joint project of the Science and Technology Park and the United Nations Children's Fund (UNICEF) in Kazakhstan. Today, nanosatellites are being developed at many world's leading universities and commercial organizations. We believe that this joint project will be another important step in the development of STEM education for girls in Kazakhstan and will become an example for the transformation of experience in other countries,” Amirkhan Adilkhanovich Temirbaev, the Director of the Science and Technology Park of Al-Farabi KazNU, said.