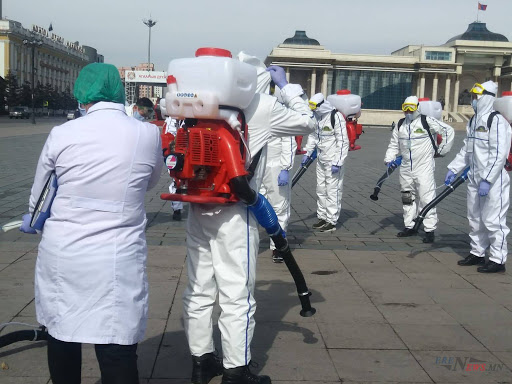 AKIPRESS.COM - On March 17, a city-wide sterilization began in the Mongolian capital, Ulaanbaatar, in order to prevent the spread of the novel coronavirus, news.mn reported.

The sterilization began at 2.00 p.m. on Sukhbaatar Square, which is from where all distances in Mongolia are measured. Cleaning here will happen every day; the center of Ulaanbaatar every day; on Tuesdays and Wednesdays other parts of the centre will be sterilized, and the suburbs and ger districts on Thursdays and Fridays.

According to the Ulaanbaatar City Governor’s Office, a total 180.8 km of paved roads, 9.2 million square meter of public areas and the streets of ger districts will be sterilized.

Mongolia has reported three new coronavirus cases among citizens repatriated by specially chartered planes from South Korea and Germany. The country, which has sealed its borders with China and Russia, last week confirmed its first coronavirus case, a French national working in the country.