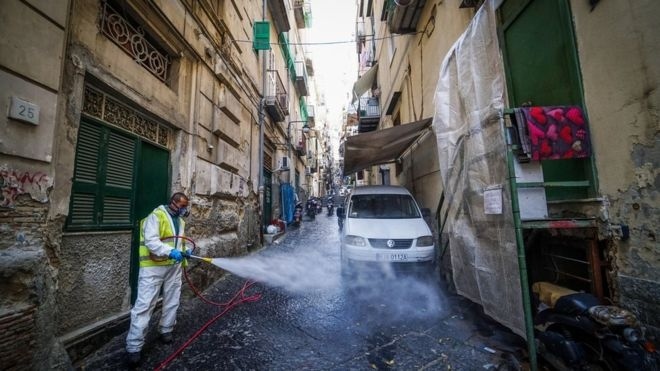 AKIPRESS.COM - Soldiers were being drafted in to help enforce the lockdown in Italy on Friday as officials announced 627 new deaths, the largest single-day toll anywhere in the world since the coronavirus outbreak began, CNN reports.

Desperate scenes have unfolded in the north of the country, particularly the hard-hit Lombardy region where infections first exploded last month, as hospitals struggle to treat thousands of cases.

And Chinese medical experts helping Italy deal with the crisis have said the restrictions imposed in Lombardy are "not strict enough."

The government has now agreed that the military can be used to help enforce the lockdown, the president of the Lombardy region, Attilio Fontana, told a news conference on Friday.

"(The request to use the army) has been accepted... and 114 soldiers will be on the ground throughout Lombardy... it is still too little, but it is positive," Fontana said. "Unfortunately we are not seeing a change of trend in the numbers, which are rising."

The soldiers had until now been deployed in the region to ensure general security in the streets.

More than 4,000 people have now died from the disease in Italy, the country's civil protection agency said Friday -- more than any other nation -- and nearly 6,000 new infections were confirmed in the past day, bringing the total to more than 47,000 cases.

Daniela Confalonieri, an Italian nurse in Milan, the region's capital, said the situation was so dire that the dead were no longer being counted.

As the mass media were not included in the list of permitted activities during the state of emergency in Kyrgyzstan, AKIpress apologizes to its readers for reduced promptness and coverage of news.
Related content
5,000 COVID-19 rapid tests dispatched to Talas region
Security Council adopts resolution on actions to contain coronavirus and to ensure food security in Kyrgyzstan
Security Council recommends sanctions for government members over insufficient efforts in Covid-19 prevention