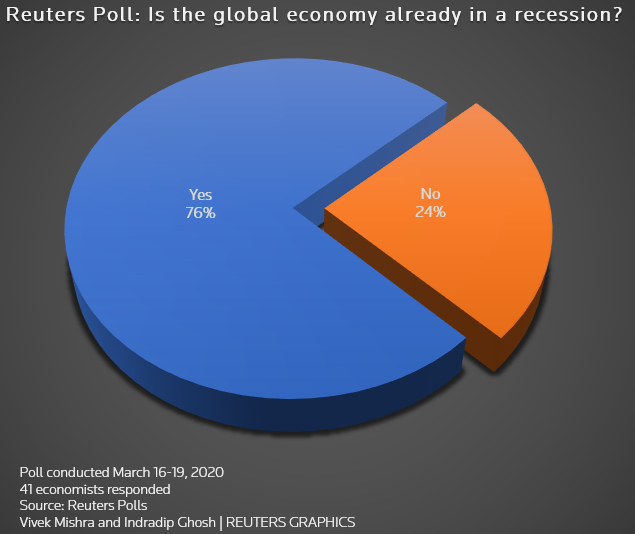 AKIPRESS.COM - The global economy is already in a recession as the hit to economic activity from the coronavirus pandemic has become more widespread, according to economists polled by Reuters amid a raft of central bank stimulus actions this week.

The spread of the disease caused by the virus, COVID-19, has sent financial markets into a tailspin despite some of the biggest emergency stimulus measures since the global financial crisis announced by dozens of central banks across Europe, the Americas, Asia and Australia.

The panic was clear in stocks, bonds, gold and commodity prices, underlining expectations of severe economic damage from the outbreak.

More than three-quarters of economists based in the Americas and Europe polled this week, 31 of 41, said the current global economic expansion had already ended, in response to a question about whether the global economy was already in recession.

“Last week we concluded that the COVID-19 shock would produce a global recession as nearly all of the world contracts over the three months between February and April,” noted Bruce Kasman, head of global economic research at JP Morgan.

“There is no longer doubt that the longest global expansion on record will end this quarter. The key outlook issue now is gauging the depth and the duration of the 2020 recession.”