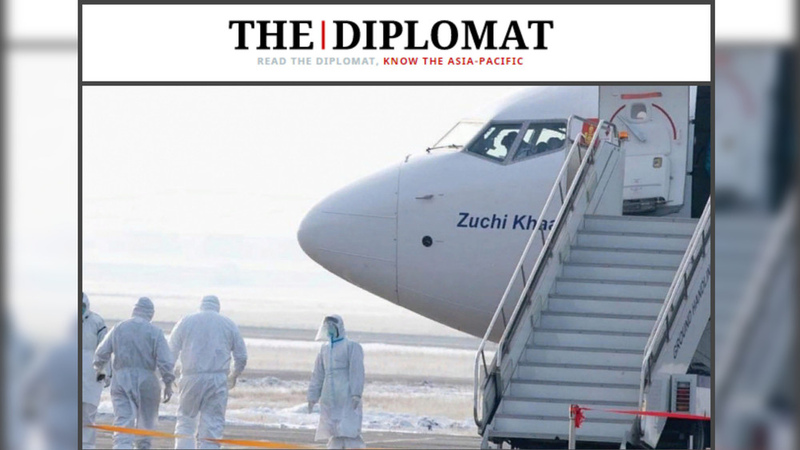 AKIPRESS.COM - The global pandemic of COVID-19 did not skip Mongolia. The disease, caused by a novel strain of coronavirus, has affected all the countries in East Asia, and the number of infected is increasing daily. As of this writing, China, where the outbreak began, had seen a total of 81,897 cases, South Korea had 9,332, Japan had 1,387, and Russia had 1,036 (North Korea has so far denied the existence of any COVID-19 cases, though that is widely questioned).

In East Asia, then, Mongolia so far has the lowest number of infected people with just 12 cases. The government of Mongolia’s containment strategy is so far working for the country of 3.2 million people, The Diplomat reports.

As early as mid-February, when the new coronavirus was beginning to spread within Chinese borders, the Mongolian government’s strategy was to adopt decisive preventative measures. By canceling the national holiday Tsagaan Sar, the Mongolian lunar new year, the country was able to slow travel between Ulaanbaatar and provinces outside the capital. Additionally, Mongolia closed its borders with China and Russia, stopping the inflow and outflow of people, and banned international flights from hotspots like South Korea. These steps have helped immensely to prevent the spread of COVID-19.

It is imperative for Mongolia to take COVID-19 seriously because of its vulnerability. The scope and the rate of infection of COVID-19 pose a great threat to Mongolia medically, economically, and socially. On the other hand, the Mongolian government was able to quickly mobilize a COVID-19 task force of 832 individuals monitoring 336 checkpoints around the country as early as February 23, 2020.

Mongolia’s small population potentially made it easier to track, locate, and contain the spread of the virus. The government was also able to bring its citizens home from countries like South Korea, Japan, Turkey, and Russia.

The first case of COVID-19 in Mongolia was a French energy company employee who traveled into Mongolia via Russia on March 2. The Mongolian government and the National Emergency Management Agency (NEMA) quickly responded by containing the man and the people he had been in contact with. The government’s containment effort was supported by the public, who had already been alerted by mid-February. Mongolians learned about the increasing severity of the outbreak and the vulnerabilities shown in China, South Korea, and Italy.

Mongolia has even been active in supporting other countries in combating COVID-19. Mongolian President Battulga Khaltmaa’s visit to China on February 27 was viewed as an example of the most genuine support to China, which at the time was in the most difficult part of its struggle to contain COVID-19. In support of China’s fight against the virus, Mongolia donated 30,000 sheep as a strategic partner and a neighbor. Mongolia has also been on the receiving end of aid. The United States, as Mongolia’s fifth strategic partner, has committed $1.2 million in financial support to combating COVID-19 in Mongolia.

On March 24, in an interview with a local media agency, Major General Badral Tuvshin, director of the National Emergency Management Agency, stated that “In combating COVID-19, Mongolia is not in the stage of a national emergency. In accordance with the decision of the Cabinet Secretariat of Mongolia, the National Emergency Management Agency is working under the ‘heightened awareness’ stage in containing COVID-19. If the situation worsens, the next level of containment strategy will be ‘all-hands-on-deck-readiness.’”

He continued by giving an outline of Mongolia’s situation: “Moreover, as of March 24, 2020, there are 2,034 people in quarantine; however, the numbers are expected to grow as Mongolians are expected to return home from abroad. Among the nine provinces that are currently utilizing quarantine facilities, Bayan-Olgii province [in the very western part of Mongolia] has the highest number of people [in quarantine], around 360.”

On March 22, 2020, the Cabinet Secretariat of Government of Mongolia assembled an emergency session and made a decision to close down schools and social activities until April 30. The government is currently expecting to receive around 750 Mongolian citizens from abroad. The earliest arrivals will be coming from South Korea on April 2, and Japan on April 3. Those arriving will be quarantined for an extended 21 days, per a recent government decision on containment of COVID-19. The successful mobilization of the Mongolian government and its task force in locating registered citizens abroad continue to play a crucial role in containment efforts.

Thanks to the National Management of Emergency Agency’s COVID-19 task force and its efforts, thus far Mongolia has been able to contain the spread of the virus in its small population.