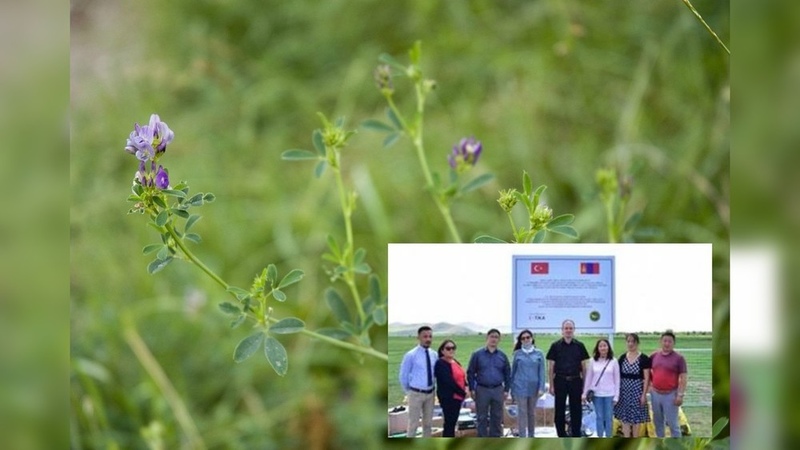 The Turkish Cooperation and Coordination Agency (TIKA) in cooperation with the Mongolia Agricultural University Faculty of Animal Husbandry and Biotechnology carried out an agricultural project in the country.

As part of the Support to Animal Feed Plant Growing project, 10 hectares (24.7 acres) of cultivation area was created with the medicago seeds and the necessary equipment brought from Turkey.

The agency’s statement said the rising air temperature in Mongolia due to global warming caused various problems such as drought and insufficiency of animal feed in the summer, making the country's economic infrastructure and lives of animal owners difficult.

Due to the harsh winter climate in Mongolia and the presence of about 80 million animals, the livestock sector is the most important sector for the country's economy.

The project of sharing Turkey's experience in livestock feed and farming areas with Mongolia first started in 2017, and continued with a three-year trial planting in different parts of the country in line with the feasibility report prepared by Turkish agricultural experts who examined the soil structure and climate conditions of Mongolia.

As part of the project, 10 hectares of hedged experimental area in the Altanbulag and Bornuur districts of the Tov province in northern Mongolia were provided by irrigation system, motor pump, feed plant pressing machine, and back pulverizer.

TIKA also provided the laboratory equipment to be used in scientific studies at the Mongolia Agricultural University Faculty of Animal Husbandry and Biotechnology.

The university authorities thanked Turkey and TIKA for the help provided.

Medicago or Medicágo satíva is herbaceous plant of Fabaceae family. It is widely used as forage crop.