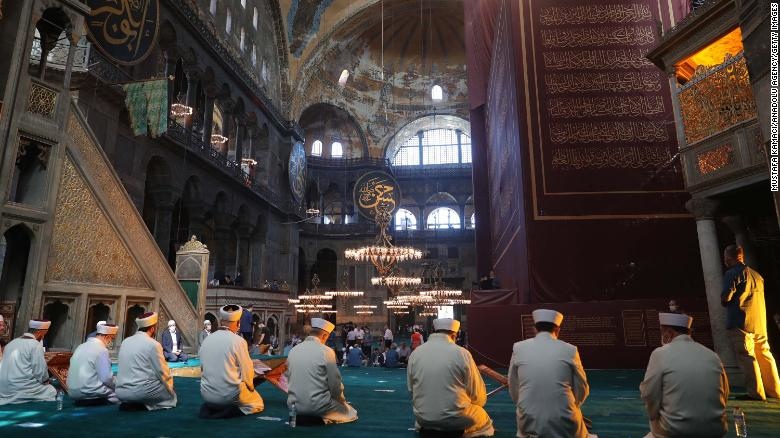 AKIPRESS.COM - Istanbul's historic Hagia Sophia has reopened for Friday prayers for the first time since a decision was made to turn it back into a mosque after more than 80 years as a museum, CNN reports.

Images on Turkish state television showed crowds of Muslims praying in and around the mosque on Friday morning.

Turkish President Recep Tayyip Erdogan participated in the Friday prayers, where he recited verses of the Quran.

Some people came from outside Istanbul and spent the night around Hagia Sophia waiting for the prayer, according to CNN Turk.

Only 500 people were invited inside the building because of coronavirus restrictions, according to Turkey's religious affairs director Ali Erbas.

Thousands more prayed in the garden and in Sultanahmet Square in Istanbul's old city.

Last week, Erdogan ordered the conversion of the historic monument after a court annulled a 1934 presidential decree that made it a museum.

The decision, involving one of the city's most important landmarks and a UNESCO World Heritage site, has been criticized by international religious and political leaders, with UN cultural agency UNESCO among those voicing concern.

However, the move has not prompted wide opposition within Turkey.

The Turkish government has tried to reassure skeptics that the building's Christian artworks and frescoes will not be touched, with technology instead being used to conceal them during Friday prayers.