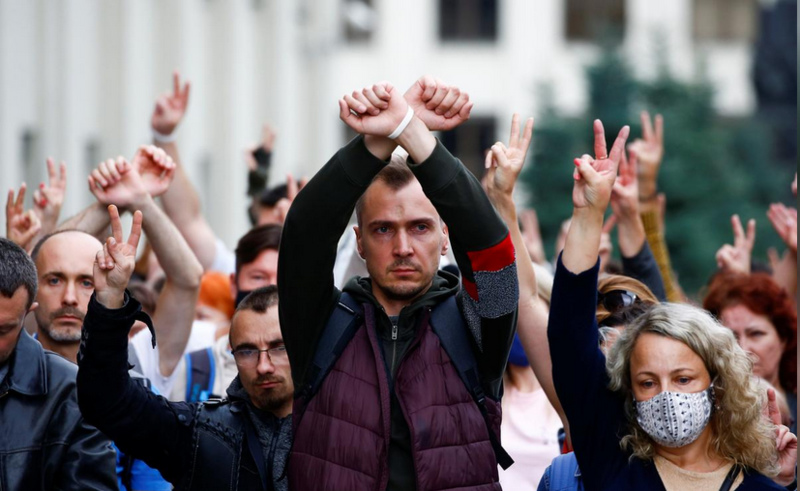 People gesture as they take part in a rally against presidential election results near the Ministry of Education in Minsk, Belarus August 25, 2020. REUTERS/Vasily Fedosenko

AKIPRESS.COM - Belarus jailed two opposition leaders for 10 days on Tuesday as the government pursued a crackdown on the few figures still at large, while schoolteachers led a new protest of thousands against President Alexander Lukashenko, Reuters reported.

Despite most major opposition figures being in jail or exile, Lukashenko has so far failed to put down protests against his 26-year-old rule, more than two weeks after an election his opponents say was rigged.

Olga Kovalkova and Siarhei Dyleuski were brought to separate courts where they were each jailed for 10 days. Kovalkova is the main representative still in Belarus of opposition candidate Svetlana Tikhanovskaya, and Dyleuski has led strikes at Minsk’s flagship tractor factory.

Both are senior figures in an opposition Coordination Council, set up last week with the self-described aim of negotiating with the authorities. They were arrested on Monday.

Lukashenko has accused the new council of attempting to seize power, and prosecutors have launched a criminal case.

In the latest protest, thousands gathered at the ministry of education to demonstrate against a threat by Lukashenko to fire schoolteachers who do not support his government. Rallies have typically attracted thousands during the week, swelling to tens of thousands on weekends.

“I have come so that teachers are not afraid, so that their voice can be heard, so that they can work even if they have a different view from the authorities,” said a literature teacher who gave her name as Svetlana.

Lukashenko has denied election cheating. He has called the protesters “rats” and says they are funded from abroad.