Coronavirus in Kyrgyzstan
Support Subscribe Log in
Log in
KyrgyzstanKazakhstanMongoliaTajikistanTurkmenistanUzbekistanWorld
art & entertainmentbusinesseconomyeducationenvironmentfinanceforeign policyhealthjustice & crimelifeopinion & analysispoliticssciencesporttechnologytravel
World|life|August 27, 2020 / 11:18 AM
Yacht with tourists from Kazakhstan set on flame and sinks in Sardinia, Italy 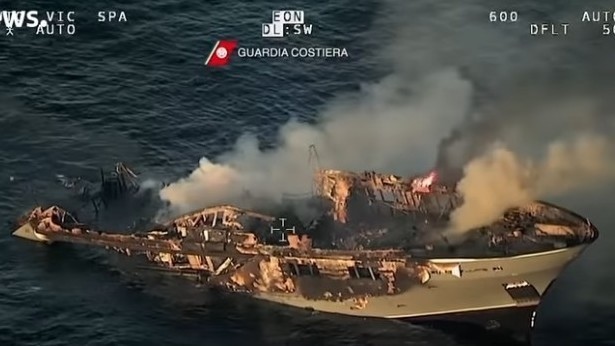 AKIPRESS.COM - Dramatic footage shot by the Italian coast guard showed a burning yacht sinking below the surface of the Mediterranean off the coast of Sardinia, Euronews reported.

Coast guard officials had said they rescued 17 people from the vessel, which left a plume of smoke behind as it disappeared into the water on Tuesday.

Two coast guard boats and a helicopter were involved in the operation.

According to Italian news agency ANSA, the 50-metre yacht, the Lady MM, was heading from Capri to Sardinia when a fire broke out on board.

The 17 people, which included eight tourists from Kazakhstan and nine crew members, had already abandoned the ship and were in a smaller boat when the coast guard arrived.