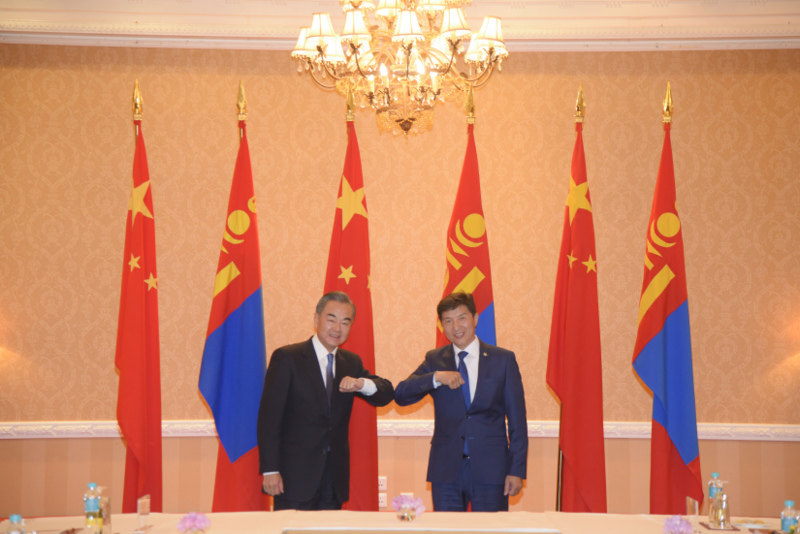 Wang said that since the novel coronavirus outbreak, China and Mongolia have helped each other and overcome the difficulties together. "We are willing to work with Mongolia to implement the consensus reached by the leaders of the two countries and push the China-Mongolia comprehensive strategic partnership to a new level," Xinhua quoted Wang  as saying.

During this visit, the two sides reached a consensus on extensive cooperation, and agreed to speed up the alignment of the joint construction of the Belt and Road and Mongolia's Prairie Road development initiative, actively promote sewage treatment plants, hydropower stations, transformation of shanty towns and other major projects that have been agreed and are under negotiation, expand the import of agricultural and animal husbandry products and coal from Mongolia, and further strengthen cooperation between ports and cross-border economic zones.

Wang emphasized that China and Mongolia are both developing countries and share extensive common interests in international and regional affairs. The two sides should strengthen their support and cooperation in the United Nations and other multilateral frameworks, and jointly send the positive note of opposing unilateralism, supporting multilateralism, opposing splitting and confrontation, and supporting win-win cooperation.

For his part, Enkhtaivan said that Mongolia attaches great importance to the development of relations with China and places cooperation with China as a priority in the country's foreign policy.

Since the outbreak of the epidemic, the two countries have maintained close, high-level communication, while political mutual trust has been solid, and mutually beneficial cooperation has been continuously deepened, said Enkhtaivan.

Saying that Wang is the first foreign minister to visit Mongolia since the outbreak, Enkhtaivan called the visit a vivid manifestation of the great importance China attaches to the Mongolia-China relations and the traditional friendship between the two neighbors.

The two foreign ministers reiterated that China and Mongolia will respect each other's sovereignty, independence and territorial integrity and will not interfere in each other's internal affairs.

After the talks, the foreign ministers signed the revised Agreement on China-Mongolia Border Ports and Their Management System, the annual cooperation plan of the Chinese and Mongolian ministries of foreign affairs and other documents, and jointly met the press.