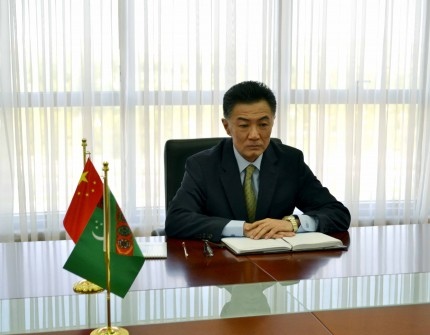 During the meeting, they discussed cooperation within the framework of the Turkmen-Chinese commission for trade-economic, transport, energy, and cultural-humanitarian cooperation.

The parties noted the importance of strengthening political and diplomatic dialogue, economic, cultural, and humanitarian cooperation. Positive cooperation in the framework of international organizations, in particular within the UN framework was also highlighted.

During the meeting, the Chinese Ambassador highlighted that work in Turkmenistan occupies a special place in his diplomatic career, as Turkmenistan and China are strategically important partners.

Turkmenistan and China cooperate in several areas. In particular, cooperation in the energy sector is highlighted.

As reported, a new field in Bagtyyarlyk contractual PSA territory is being put into operation in the country. The exploration and development of this field are carried out by the China National Petroleum Corporation (CNPC).

CNPC signed the Bagtyyarlyk Production Sharing Agreement with Turkmenistan in 2007 and began to purchase natural fuel in Central Asia since 2009, after the launch of a gas pipeline from Turkmenistan to China through the territories of Uzbekistan and Kazakhstan.