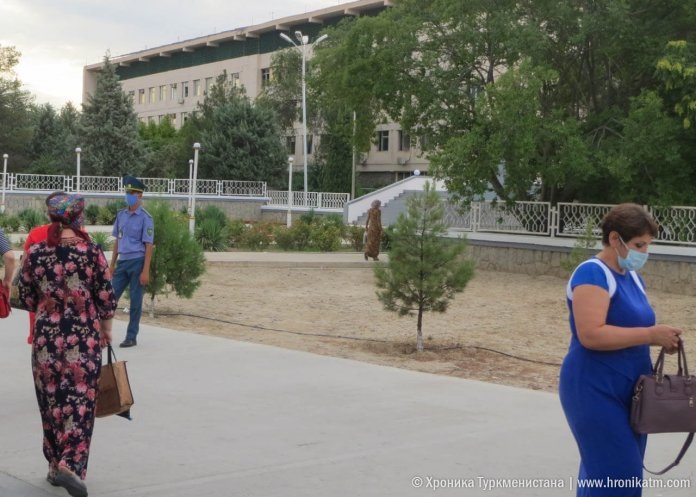 AKIPRESS.COM - Ashgabat police are imposing fines on residents who are not wearing masks, including children, Chronicles of Turkmenistan reports.

Starting from early in the morning those who wish to buy oil, sugar, eggs and chicken drumsticks at low prices line up in front of the state-run store “Karakum” located in the 30th residential district. Heated arguments and fights break out on a daily basis. Although police officers are on duty it is not order that they are ensuring.

On 27 October, 2020 two police officers seized a woman from the queue who was not wearing a mask. She was holding a 50 manat banknote to buy groceries. The officers dragged her to a police vehicle in order to take her to a police station. They then confiscated the money and told her that they would impose a fine but eventually released her. No receipt was given. The woman headed home in tears complaining she no longer had any money to feed her children.

Several children in the queue, who were also not wearing any masks, fled. “Chronicles of Turkmenistan” previously reported that more children can now be seen in the queues because of autumn school break.

Let us recall that on 19 October residents of Ashgabat received text messages on behalf of Turkmenistan’s Ministry of Healthcare and Medical Industry instructing them to wear masks in public places and keep social distancing of 2 meters. Police officers patrol the streets and public transport to make sure the requirement is being observed. At that time no fines were being imposed on those who violated the requirement.

Later Radio “Azatlyk” reported that police officers had been instructed to impose at least one fine a day for violating the requirement to wear masks.