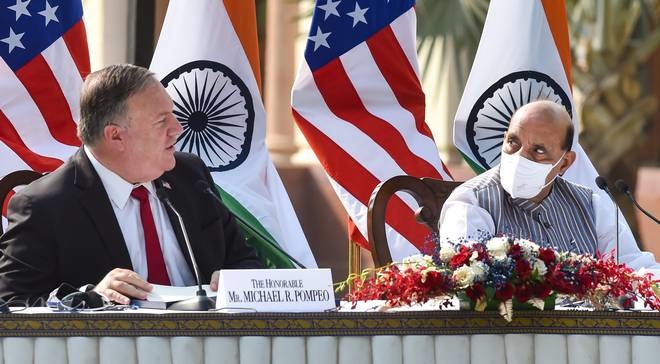 The two nations welcomed the elevation of the U.S.-India Comprehensive Global Strategic Partnership, which is vital to security and stability in the region and the world.

During the meeting, Secretary Pompeo reaffirmed the increasingly close U.S.-India relationship and the shared goals among like-minded Indo-Pacific countries for regional security and prosperity. The two nations welcomed the second Quad meeting, held at the Foreign Minister level on October 6 in Tokyo, and looked forward to close collaboration during India’s upcoming term on the U.N. Security Council. Secretary Pompeo and his counterparts reaffirmed U.S.-India healthcare collaboration to develop vaccines, therapeutics, and essential medical equipment. They welcomed an initiative to collaborate through an International Center of Excellence in Research focused on infectious diseases, including COVID-19 and other emerging threats. Secretary Pompeo and his counterparts also discussed increased cooperation on energy, space, sustainable financing for infrastructure development, cybersecurity, and counterterrorism, and looked forward to new collaboration in those areas. The two sides reaffirmed the close bonds between our people and welcomed the inaugural Parliamentary exchange later this year.

The Secretary and his counterparts also discussed ways to advance the 21st century defense partnership. They welcomed increased cooperation between the U.S. and Indian militaries by expanding information-sharing, defense trade, joint service coordination, and interoperability. They also welcomed increased bilateral and multilateral cooperation, including the upcoming MALABAR naval exercise. Both sides signed the Basic Exchange and Cooperation Agreement (BECA) to expand geospatial information sharing between the countries’ armed forces and committed to the exchange of additional liaison officers.

Secretary Pompeo while speaking to media on conclusion of the dialogue on Tuesday said that the United States will support India and stand with the people of India to defend its territorial sovereignty and liberty. He also said that the Chinese Communist Party (CCP) is “no friend to democracy”. Pompeo also referred to the greater threats posed by China in the Asia-Pacific region and the COVID-19 pandemic.

“Our leaders and our citizens see with increasing clarity that the CCP is no friend to democracy, the rule of law, transparency, nor to freedom of navigation, the foundation of a free and open and prosperous Indo-Pacific. I am glad to say that the U.S. and India are taking steps to strengthen cooperation against all manner of threats and not just those posed by the Chinese Communist Party,” said Pompeo addressing the media at the Hyderabad House.

In his opening remarks, Defense Minister Rajnath Singh laid out the challenges before India. Singh said, “We are meeting today at an extraordinary time. This pandemic is something that we have never experienced in our lifetime.. ..our partnership is becoming stronger because of the challenges that we are facing at present.” The Minister’s comments were taken forward by Pompeo, promising American support.

Apart from BECA, India and the U.S. also sealed an MoU on Technical Cooperation in Earth Observations and Earth Sciences, and an agreement to extend duration of the MoU regarding the Global Center for Nuclear Energy Partnership. The two sides also signed an agreement on electronic exchange of customs data and a letter of intent regarding cooperation in traditional Indian medicines.

A Joint Statement issued following the conclusion of the visit of the American dignitaries highlighted shared Indo-U.S. goals in the Asia-Pacific region and “emphasized that the Code of Conduct in the South China sea should not prejudice the legitimate rights and interests of any nation in accordance with international law”. The two sides also decided to expand joint capacity building activities with partner countries in the Indo-Pacific region.

Pompeo also referred to the loss of lives of Indian soldiers in the clash with the Chinese PLA troops in June and said India and the U.S. are committed to upholding common values against threats.

“Today morning we have been to the National War Memorial to pay homage to the brave men and women of the Indian armed forces who have sacrificed for the world's largest democracy including 20 that were killed by the PLA forces in Galwan valley in June,” Pompeo said.

Explaining the “2+2” dialogue, India’s foreign minister Dr. Jaishankar said the discussions had a political military content. “Our national security convergences have obviously grown in a more multipolar world. We meet today to not only advance our own interests but to ensure that our bilateral cooperation makes a positive contribution in the world arena,” he said.

Speaking about the conclusion of BECA ahead of the U.S. presidential election, a highly placed government source said that the presence of the U.S. Secretaries of State and Defense in India despite the election season in the U.S. is a sign of the importance that the U.S. attaches to India.

“It is a demonstration to the world at large,” said the official about the discussions between the two sides. Apart from Indo-Pacific region, the two sides also discussed the status of Afghanistan and supported an Afghan-led and Afghan-owned peace process.

BECA enables exchange of geospatial data and information between the two countries and will improve the accuracy of India’s missiles in future during precision strikes.

BECA will help share geospatial maps and charts between U.S. and India, which may have been acquired from multiple sources like satellites, UAVs, reconnaissance aircraft, aerostats among others, said Captain (IN) Vikram Mahajan (Retd), Director, Aerospace and Defense at U.S.-India Strategic Partnership Forum.

“Data shared from BECA will help in identifying, updating and tracking of various types of target and their position, both on land and sea,” he told The Hindu.

Terming the signing of BECA a “significant achievement,” Defense Minister Rajnath Singh said the U.S. accepted an Indian request for “cooperation in the advanced field of maritime domain awareness.” As part of measures to enhance military to military cooperation Singh said now Liaison Officers at each other's establishments could be leveraged to enhance “information sharing architecture” while in the joint statement both sides “reiterated their intent to assign additional Liaison Officers.”

On behalf of the United States, Secretary Pompeo and Secretary Esper extended invitation to their Indian counterparts for the next U.S.-India 2+2 Ministerial Dialogue, to be hosted in Washington, D.C. The leaders looked forward to another year of close cooperation between our countries to further advance the U.S.-India Comprehensive Global Strategic Partnership.