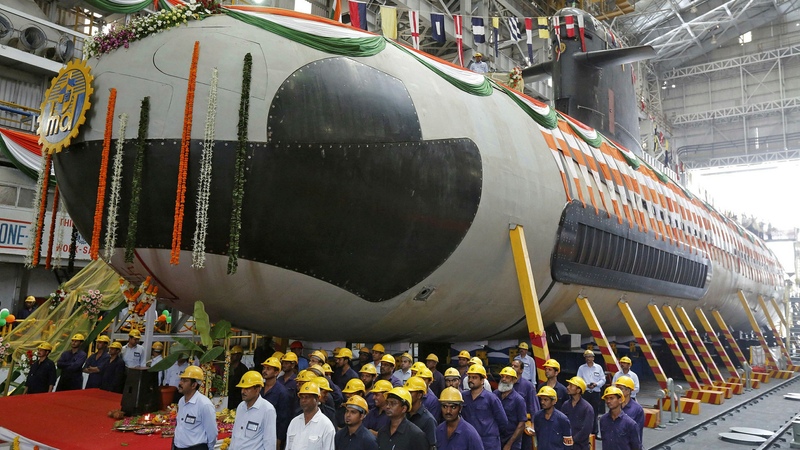 Workers gather around the Indian Navy's first Scorpene submarine as it leaves a shipyard Mumbai in 2015. Photo: Reuters

AKIPRESS.COM - Taking their bilateral defense cooperation to new heights, India is giving a Soviet-era Kilo-class submarine to Myanmar, a move that many analysts see as an attempt by New Delhi to counter China's clout in the region, Asia Nikkei reported.

The diesel-electric submarine, the INS Sindhuvir, which was commissioned to the Indian Navy in 1988, has been refurbished by state-run defense shipbuilder Hindustan Shipyard. With a displacement of 3,000 tons, a maximum operating depth of 300 meters and a top speed of 18 knots, the vessel is Myanmar's first submarine.

Indian government’s spokesperson in a recent briefing to media said that "Cooperation in the maritime domain is a part of India’s diverse and enhanced engagement with Myanmar". "In this context, India will be delivering a kilo-class submarine, INS Sindhuvir, to the Myanmar Navy," the spokesperson added.

The move was in accordance with India's vision of "security and growth for all in the region, and also in line with our commitment to build capacities and self-reliance in all our neighboring countries."

The submarine has been renamed UMS Minye Theinkhathu, taking its name from a historical hero in Myanmar, and was showcased during the navy's fleet exercise last week.

Myanmar military's commander in chief, Senior Gen. Min Aung Hlaing, stressed on his website that "to be a more modernized navy, [we] must be facilitated with submarines. We have been trying and considering to possess submarine for many decades."

The announcement followed the Oct. 4-5 visit of Indian Army chief Gen. Manoj Mukund Naravane and Foreign Secretary Harsh Vardhan Shringla to Myanmar, where they met leaders such as State Counselor Aung San Suu Kyi, as well as Min Aung Hlaing. During the visit, the two sides agreed to strengthen their partnership in connectivity projects, capacity-building and trade, and to broaden their defense exchanges across all three services -- army, navy and air force.

Myanmar is the only country in Southeast Asia that shares a land border with India. That frontier stretches for more than 1,600 km. The two also share a 725 km maritime boundary in the Bay of Bengal. New Delhi sees Myanmar as its gateway to Southeast Asia, with which it is seeking greater economic integration through its 'Act East' policy.

Myanmar is also part of the 10-member Association of the Southeast Asian Nations. India has repeatedly emphasized the need for ASEAN to play a central role in the Indo-Pacific as China asserts itself in the region.

"India's decision to provide a submarine to Myanmar ... seems to be a well-calculated strategy to counterbalance an assertive China," Shamshad Ahmad Khan, a visiting associate fellow at the New Delhi-based Institute of Chinese Studies, told Nikkei Asia. "By providing such a critical defense arsenal to Myanmar, India is clearly trying to augment the naval capability of its eastern neighbor to achieve a balance of power against China." Amid a tense, months long border standoff between India and China, it seems New Delhi "is eyeing more and more defense and security partners to hedge against the Chinese navy," he added.

News portal Defence.Capital, pointed out that Myanmar plans to buy similar Kilo-class submarines from Russia, which will be delivered in the next few years. Myanmar has not acknowledged a deal to purchase Russian-built submarines.

It is expected that INS Sindhuvir "will be utilized by Myanmar to train its naval personnel [and] to prepare them to operate the Russia-delivered submarines later".

Myanmar, meanwhile, no longer appears keen to buy all its defense equipment from China, which is a major economic partner. "There's no denying of the fact that [Beijing] would be concerned about it".

Strengthening maritime defense ties with Myanmar may be part of a larger strategy for India. India has maritime security cooperation with Sri Lanka and Maldives. New Delhi might be thinking of a similar mechanism with regard to India, Myanmar and Thailand through which it will be able to protect the Bay of Bengal in a better way.

The Bay of Bengal is in the northeastern Indian Ocean, which New Delhi aims to secure by boosting maritime security cooperation with these countries as part of a broader effort under the quadrilateral security dialogue or Quad for "a free, open and inclusive Indo-Pacific," a euphemism for containing Chinese influence in the region.

In Myanmar, China is leading an infrastructure project to build a deep-water port in Kyaukphyu, which is to be connected with China's Yunnan Province by road and rail. The U.S., India and Japan are all keeping a sharp eye on the project, fearing the port could be used by China for military purposes.

Despite the military-to-military cooperation between Myanmar and China during Myanmar's period of estrangement from the West in the 1990s and 2000s, Myanmar's military is itself aware of China's ambitions. China maintains unofficial connections with the ethnic armed groups in China-Myanmar border areas, which Myanmar sees as a threat to its sovereignty.

David R. Stilwell, U.S. assistant secretary of state for East Asia and the Pacific, voiced concern about the situation in remarks last month, saying, "We are also concerned by the persistent reports of Chinese weapons ending up in the hands of various armed groups in Myanmar, a further contribution to regional instability."