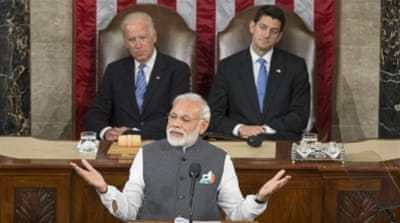 Biden had chaired the Joint Session of the US Congress that was addressed by Modi during his 2016 visit to Washington [File: EPA]

Modi congratulated Biden during their conversation on November 17 and they discussed their priorities, including containing the coronavirus pandemic, promoting access to affordable vaccines, tackling climate change and cooperating in the Indo-Pacific Region, Indian government said in a statement.

Modi had earlier tweeted his congratulations to Biden and Vice President-elect Kamala Harris on November 8.

The Indian prime minister recalled his earlier interactions with Biden, including during his official visits to the United States in 2014 and 2016. Biden had visited India in 2013. Biden had chaired the Joint Session of the US Congress that was addressed by Modi during his 2016 visit to Washington.

Modi is known for his public displays of bonhomie with President Donald Trump who visited India in February 2020.

Analysts say India-US relationship enjoys bipartisan support, and the US wants India as a key partner in efforts to push back against China. India enjoys a strong and growing relationship with the US, with five Republican and Democrat US presidents visiting the South Asian nation in the last 10 years.

India’s External Affairs Minister Subrahmanyam Jaishankar said on November 17 that ties between New Delhi and Washington will expand further under the Biden administration.

“As vice president, we dealt with him. I happened to be the ambassador during the last phase of the Obama administration. We’d known him earlier when he was in the Senate Foreign Relations Committee as the ranking Democratic member and then as the chairman,” Jaishankar said while speaking at an online discussion organized by the think-tank Gateway House.