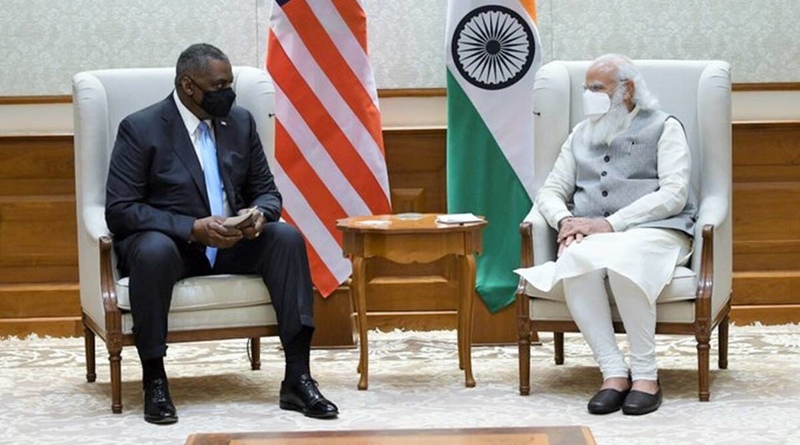 It is the first visit to India by a top official of the Biden administration. Austin was on a three-nation first overseas tour. He visited Japan and South Korea before visiting India.

Austin called on Prime Minister Narendra Modi and expressed America’s strong desire to further enhance the strategic partnership between the two countries for peace, stability and prosperity in the Indo-Pacific region and beyond.

Secretary Austin said that India is an increasingly important partner amid today’s rapidly shifting international dynamics, and added that the ties between Washington and New Delhi are a “stronghold of a free and open Indo-Pacific region”.

“I’m pleased to report that Defense Minister Singh and I had a very productive discussion on a number of security issues important to our two countries. And at the top of my agenda, I wanted to convey the Biden-Harris administration’s message of our strong commitment to our allies and partners. India, in particular, is an increasingly important partner amid today’s rapidly shifting international dynamics,” Austin said while making the joint statement along with Indian Defense Minister Rajnath Singh.

Austin also reaffirming Washington’s support to India’s call for an open, free and inclusive Indo-Pacific region and said: “As the world faces a global pandemic and growing challenge to an open and stable international system, the U.S.-India relationship is a stronghold of a free and open Indo-Pacific region.”

“Prime Minister Modi has stated that India stands for ‘freedom of navigation and overflight, unimpeded lawful commerce, and adherence to international law.’ This is a resounding affirmation of our shared vision for regional security in the Indo-Pacific. And it’s clear that the importance of this partnership and its impact to the international rules-based order will only grow in the years ahead,” he said.

Austin further said that he and Singh discussed opportunities to elevate the U.S.-India Major Defense Partnership that, “a priority of the Biden-Harris Administration through regional security cooperation, military-to-military interactions, and defense trade.”

“In addition, we are continuing to advance new areas of collaboration, including information-sharing, logistics cooperation, artificial intelligence; and cooperation in new domains such as space and cyber,” he said.

“Despite today’s challenging security environment, the partnership between the United States and India — the world’s two largest democracies — remains resilient and strong. And we will seek every opportunity to build upon this major partnership,” Austin added.

Meanwhile, Rajnath Singh said that he looks forward to making the India-US partnership one of the defining partnerships of the 21st century.

“The recent summit of leaders of Australia, India, Japan and the USA under the Quad framework emphasised our resolve to maintain a free, open and inclusive Indo-Pacific region. We discussed the need for enhanced capacity building to address some of the non-traditional challenges such as oil spills and environmental disasters, drug trafficking, Illegal, Unreported, Unregulated (IUU) fishing, etc,” Singh said.

Rajnath Singh added, “India is committed to further consolidate our robust defence partnership with the United States. I look forward to working with you closely to make the India-US relationship one of the defining partnerships of the 21st century.”

Top American lawmakers have welcomed Austin’s first visit to India, the U.S.’ “strategic partner,” as they highlighted the importance of the bilateral ties which are critical for the security and stability in the Indo-Pacific amidst Chinese aggression.

Congressmen Filemon Vela, Vice-Chair of the Democratic Party, Frank Pallone , Anthony Brown and Congresswoman Stephanie Murphy said that “the U.S. has been favouring making Quad, a security architecture, stronger, which is essential to protecting our interests in the Indo-Pacific region”. They also said that “the U.S.-India strategic partnership is critical to security and stability in the region. Strengthening this relationship only makes us stronger together Free and Open Indo Pacific”.

His visit to India came days after the top leadership of the four-member Quad grouping vowed to expand their cooperation in the Indo-Pacific region.