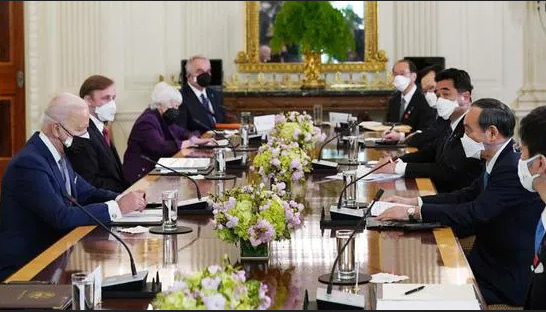 Waiting nearly three months for his first summit due to the COVID-19 pandemic, Biden told Prime Minister Suga that Japan had "our iron-clad support" on security issues and beyond.

"We're going to work together to prove that democracies can still compete and win in the 21st century," Biden told a joint, socially distanced news conference in the White House Rose Garden.

Suga said Biden reaffirmed that the US-Japan Security Treaty covers the Japanese-administered Senkaku islands — which Beijing calls Diaoyu and claims its own.

"Freedom, democracy, human rights and the rule of law are the universal values that link our alliance," he said, echoing a frequent theme of Biden.

Biden's decision to invite Suga as his first guest — with South Korean President Moon Jae-in set to come in May — is meant to show the value his administration puts on allies.

The US President and Japanese Prime Minister said they will continue to work with Australia and India through the Quad, which ‘has never been stronger’

“Together, we will continue to work with allies and partners, including with Australia and India through four-nation Quadrilateral Security Dialogue (Quad), which has never been stronger, to build the free, open, accessible, diverse, and thriving Indo-Pacific we all seek,” the leaders said in a joint statement after their meeting.

Quad figured prominently in their discussions, remarks and the customary joint statement, demonstrating its growing importance for the foreign policy outlooks of the two countries.

The two leaders were expected to announce the first in-person summit of the Quad close on the heels of the Quad summit hosted virtually by Biden in March, as said by a senior Biden administration official earlier.

Japan is keen to have the Quad summit on the sidelines of the upcoming G-7 summit in the United Kingdom.

The leaders personally pledged commitment to the Quad several times in their remarks at the joint briefing. “Earlier this year, we - together with India and Australia - launched the landmark Quad Vaccine Partnership to expand the manufacturing of Covid-19 vaccines and assist countries throughout the region with vaccination efforts,” Biden said in his opening remarks at the joint news conference.

India will manufacture one billion does of Covid-19 vaccines by the end of 2022 under this initiative which is being funded by the United States and Japan. Australia will pay for its distribution.

In his opening remarks, Suga underlined the importance of Quad in a free and open Indo-Pacific by cooperating with “other countries and regions, including the ASEAN, (and fellow Quad members) Australia, and India”.

Biden and Suga also emphasized “the importance of peace and stability across the Taiwan Strait” and encouraged “the peaceful resolution of cross-Strait issues.The forthright statement comes despite Japan’s efforts in recent years not to antagonize China, its top trading partner, including by not joining Western nations in sanctions.

In a highly unusual comment by a Japanese leader on the US domestic scene, Suga also voiced concern over a wave of attacks in the United States against people of Asian descent.

On Climate commitments, Japan and the US will lead global decarbonization, Suga said.

Biden and Suga said they would step up joint development and testing of fifth-generation Internet (5G) – as well as the sixth-generation technologies of the future. A joint statement said the United States had committed $2.5 billion and Japan another $2 billion.