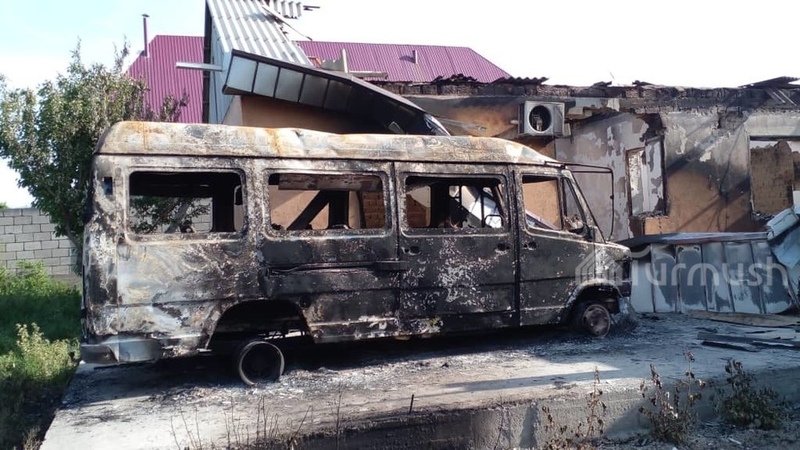 AKIPRESS.COM - Four days after the conflict, the local people began returning to their villages. They are shocked to see the condition of their homes and property, which were looted and burned down.

Mukhridin Turdybaev, a resident of the village of Arka, Leilek district, Batken region, lost his bakery and store as a result of the armed conflict on the Kyrgyz-Tajik border.  "We had a bakery, a room next to it where we baked cheburek and pirozhki. A little further away there was a store. The preliminary amount of damage was about 3 million soms. But we haven't calculated the damage to the store yet," he said.

As a result of the armed conflict on the Kyrgyz-Tajik border, 9 residential houses, 10 gas stations and 8 stores  in the Arka village were burned, according to the Ministry of Emergency Situations of the Kyrgyz Republic data as of May 2.

In the morning of April 30, Tajik special equipment arrived in the village and began destroying houses and facilities. The villagers had been evacuated the day before; others had managed to leave in their cars. Locals managed to only take their documents with them during evacuation.

The village of Jany-Jer in the Leilek district is located 300 meters from the border with Tajikistan.

According to the Jany-Jer villagers, the residents of the neighboring state took away all the valuable things from the houses hijacking Hyundai car of local resident Ermek Saparov. The car owner reported hijacking to police and also added he got robbed of 100 thousand soms.

Valuables, gold jewelry and money disappeared from all the houses of the villagers. "That day we were told to take our passports and run. Everyone took their documents and ran to the mountains. Margun village is located behind the mountain, where everyone camped out. There are few houses there, it's hard for everyone there now living 40 people in one house. We were afraid to go back home," says local resident Nurtilek Kadyrov.

Tensions on the border of Kyrgyzstan and Tajikistan escalated on April 28-29 and exchange of fire occurred between the military units of two sides.  35 Kyrgyz citizens were killed, including a 12-year-old girl. At least 180 other Kyrgyzstanis were injured.  Some 33,388 people were displaced from the villages in Batken region, 19,142 children among them, Deputy Minister of Health and Social Development Aliza Soltonbekova told a briefing. Residents of Ak-Sai, Ak-Tatyr, Kara-Bak, Samarkandek villages of Batken district and Jany-Jer, Beshkent, Kulundu villages of Leilek district were evacuated.