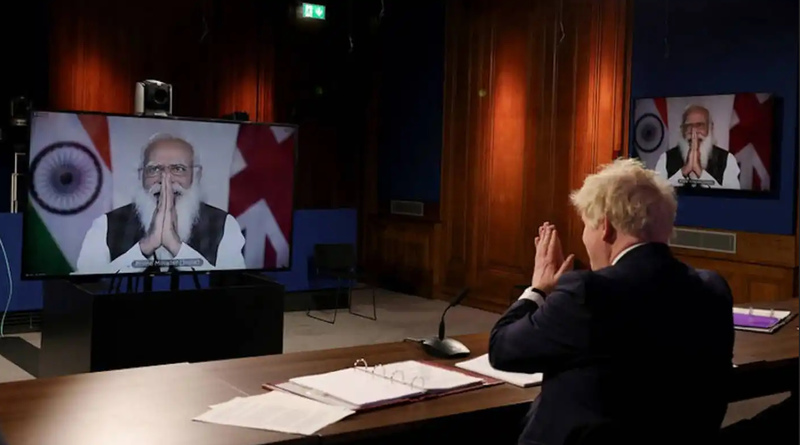 With his planned visit to India twice postponed owing to COVID-19, British Prime Minister Boris Johnson held a virtual meeting with his Indian counterpart Narendra Modi on May 4 during which they announced a 10-year plan to deepen the bilateral relationship with a focus on trade and defense. Nine MoUs/Declarations on different fields were agreed/announced at the summit.

The "2030 Roadmap" elevates the relationship to a comprehensive strategic partnership, as it also focuses on people-to-people connections, climate action, defense, security, UNSC reforms and health. Indian officials said the declaration of an enhanced trade partnership was one of the "big-ticket" announcements of the summit. Both leaders further decided to quickly conclude discussions on a free trade agreement.

Though the two countries' strategic partnership stretches back more than 16 years, their move to take "a quantum leap" as they have termed it, is a sign of how their strategic interests have aligned more closely over the last year. China's increasingly assertive stance, shifting views on Beijing due to the coronavirus pandemic, and Brexit have all led to this convergence.

Increased cooperation in defense is a significant pillar of the road map, with an aim to develop a "free, open and secure Indo-Pacific region." A new strategic collaborative partnership was announced to "develop transformational defense and security capabilities to tackle common threats and the operational challenges of the future."

In a tweet, Prime Minister Narendra Modi wrote, “We welcomed the launch of an Enhanced Trade Partnership as a roadmap to a comprehensive FTA, with a target to more than double the bilateral trade by 2030. We also agreed upon several new initiatives in health, technology, energy, etc.”

British Prime Minister Boris Johnson said: “The UK and India share many fundamental values. The UK is one of the oldest democracies, and India is the world’s largest. We are both committed members of the Commonwealth. And there is a living bridge uniting the people of our countries.

The two leaders discussed the Covid-19 situation and ongoing cooperation in the fight against the pandemic, including the successful partnership on vaccines. “They agreed to expand and enhance the existing UK-India vaccines partnership, highlighting the successful collaboration between Oxford University, Astra Zeneca and the Serum Institute of India on an effective Covid-19 vaccine that is 'developed in UK', 'Made in India' and 'distributed globally'.

The Enhanced Trade Partnership involves 1 billion pounds ($1.39 billion) of new trade and investment and will begin by lowering non-tariff barriers on U.K. exports of fruit and medical devices. Looking ahead, the two have committed to working on removing barriers for the services sector and mutually recognizing professional qualifications. British exports to India are worth more than £446 million.

For the U.K., India poses a potential market of more than 1.3 billion people. London has signaled it wants to negotiate down the 150% Indian government tariff on Scotch whisky, for which India is the third-largest export market by volume, as well as the 125% tariff on automobiles.

The two sides signed a pact on migration and mobility under which up to 3,000 young Indian professionals a year can avail of employment opportunities in the U.K., while New Delhi will take back Indian nationals staying illegally in Britain.

The two sides also discussed the early conclusion of the Free Trade Agreement between two sides. “They agreed to continue removing trade barriers on the path to an FTA, and an ambitious target of more than doubling India-UK trade by 2030,” said the joint statement.

The British government announced a tilt toward the Indo-Pacific region in a major policy review in March, with the accompanying Defense Command Paper stating that the UK-India partnership is "a key pillar" of that strategy.

A maritime partnership in the western Indian Ocean will be facilitated through a new annual maritime dialogue, as well as strengthening information-sharing and operational coordination. This year, the British aircraft carrier HMS Queen Elizabeth will lead a carrier strike group to the Indo-Pacific region, and will conduct joint training exercises with India's navy and air force for future cooperation in the western Indian Ocean.