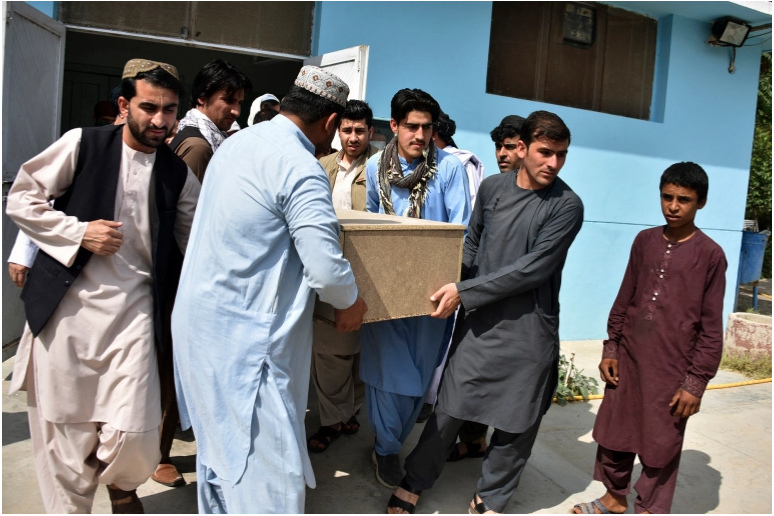 Relatives carry a coffin with the body of television journalist Nemat Rawan he was shot dead by gunmen, in Kandahar province [Javed Tanveer/AFP]

AKIPRESS.COM - An Afghan journalist who worked for Afghanistan's finance ministry was shot dead by unidentified gunmen in the southern city of Kandahar on May 6, provincial officials said, as violence mounted across the country amid a U.S. troop withdrawal, Aljazeera reported.

No group immediately claimed responsibility but government officials and Western powers usually blame Taliban insurgents for such attacks, which they deny.

Rawan hosted a popular talk show on the country’s leading broadcaster, Tolo News, before joining the ministry of finance as a communications specialist last month.

At least 11 Afghan journalists were killed in 2020, with four more reportedly murdered this year, according to a recent toll from Amnesty International.

In early March, three female media workers were gunned down in the eastern city of Jalalabad.

Around 1,000 Afghan media workers have left their jobs in the past six months, an Afghan journalists’ safety committee said recently.

Afghanistan has long been ranked as one of the most dangerous countries in the world for journalists.

Members of Afghanistan’s educated class – including journalists, activists and judges – have for months been the target of bombings and shootings, forcing many to go into hiding or leave the country.

Taliban spokesman Zabihullah Mujahid denied the militant group was behind the shooting of Rawan in Kandahar. In tweets on Wednesday, Mujahid had warned against "propaganda and one-sided broadcasts" by some media outlets.

"If this continues, the responsibility for the next steps will fall on the media officials and its staff themselves," he said.

President Ashraf Ghani condemned the attack and said the militants could not the silence the people's freedom of speech.

Abdullah Abdullah, the head of the country’s peace council, on Thursday condemned the Taliban’s threat against the media and “any attempts to silence Afghan journalists”.