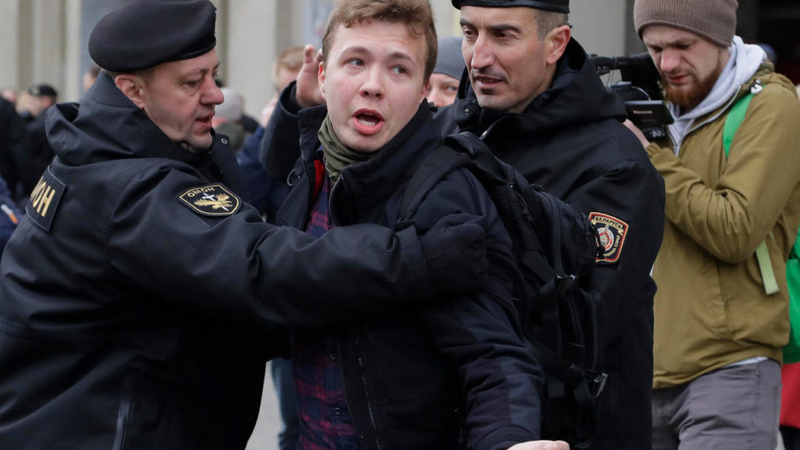 Police officers detain Raman Pratasevich as he attempts to cover a rally in Minsk in March 2017.

AKIPRESS.COM - The head of NATO has joined the leaders of several EU countries in demanding an investigation into the diversion on May 23 of a Lithuanian-bound flight to Minsk, where authorities arrested one of its passengers, opposition activist and journalist Raman Pratasevich, RFE/RL reports.

NATO Secretary-General Jens Stoltenberg said that the alliance was closely monitoring the "forcible landing" of the flight -- from Athens to Vilnius -- in Belarus and the reported detention of Pratasevich.

"This is a serious & dangerous incident which requires international investigation. Belarus must ensure safe return of crew & all passengers," Stoltenberg said on Twitter.

Ryanair said the flight arrived safely in Vilnius on May 23 after a delay in Minsk of several hours. The Irish airline said earlier that "nothing untoward" had been found after it was notified of a potential security threat on board by Belarus air traffic control and instructed to divert.

Lithuanian President Gitanas Nauseda earlier slammed the arrest of Pratasevich on Twitter, calling it an “unprecedented event" and saying the Belarusian regime is “behind this abhorrent action.”

Belarusian state news agency BelTA reported that authoritarian leader Alyaksandr Lukashenka had personally ordered a fighter jet to escort the Ryanair jet, which was carrying more than 100 passengers, to land in Minsk.

Pratasevich was taken away by police shortly after the Ryanair flight landed in the Belarusian capital.

Pratasevich was a key administrator of the Telegram channel NEXTA Live, which has been covering the protests that broke out in Belarus following the country’s disputed presidential election last August.

Belarusian authorities in November launched investigations into Pratasevich and a colleague, Stsyapan Putsila, on suspicion of the organization of mass disorder, disruption of social order, and inciting social hatred.