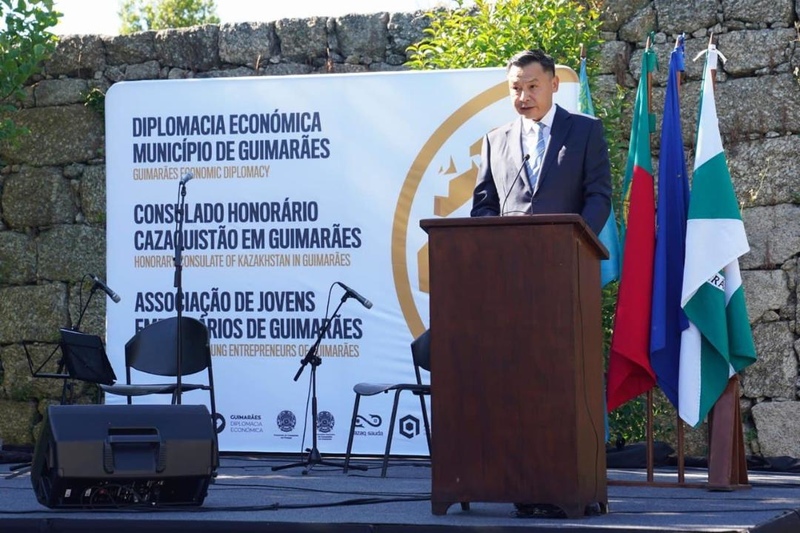 Kazakhstan's Ambassador to Portugal Daulet Batrashev, the Mayor of Guimaraes Domingos Bragança, the leadership of the regions that make up the consular district, as well as representatives of the country's academic, social, political, business and media attended the event. The Honorary Consul of Kazakhstan, Gil Vieira, head of “Resumesferico”, will operate in the districts of Braga, Viana do Castelo, Vila Real, Bragança, Porto, Aveiro, Viseu, Guarda, Coimbra and Castelo Branco.

At the ceremony, the Ambassador emphasized that the establishment of the Honorary Consulate of Kazakhstan is a visible evidence of the development of the Kazakh-Portuguese friendship, contributing to further expansion of trade, economic, investment and humanitarian cooperation between the countries. The Kazakh diplomat thanked the leadership of Guimaraes for their support and presented Gil Vieira with state symbols to be used in the activities of the Honorary Consulate.

The dignitaries of the northern regions of Portugal, welcoming the opening of the Honorary Consulate, expressed confidence that it would contribute to the development of inter-regional bilateral cooperation. For his part, Mayor of Guimaraes Domingos Bragança noted the interest in expanding mutually beneficial relations with Kazakhstan, emphasizing the wide range of opportunities that the city can provide to further develop cooperation between the regions of the two countries. In this regard, Bragança expressed his intention to visit Turkestan in the near future to establish twinning relations and thoroughly discuss the bilateral cooperation agenda.