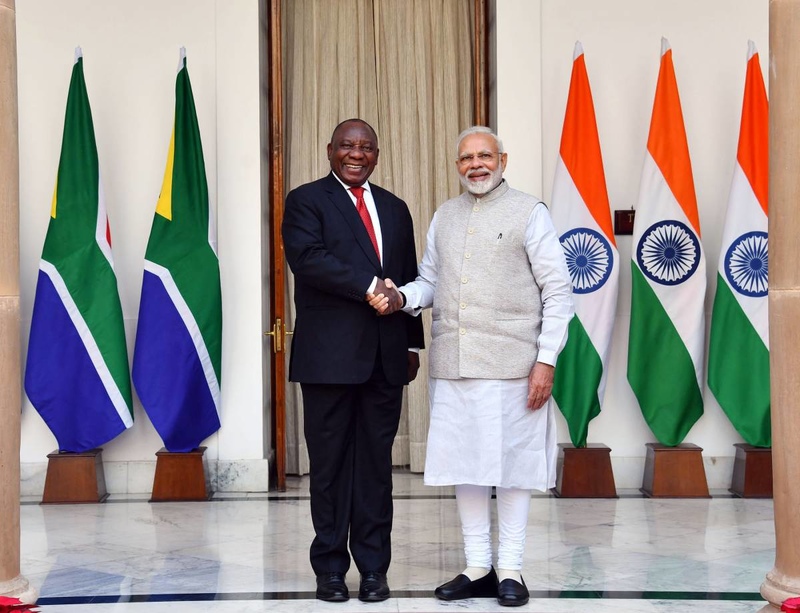 AKIPRESS.COM - India has always stood with Africa even if it formally announced its Africa policy only during the visit of PM Modi to Uganda in 2018, Asian Lite reported.

The African Union and several regional organizations have attempted to discourage military coup d’etat that was quite frequent a couple of decades ago.

Besides their politico-economic agony Africans have also been afflicted by the Corona pandemic. This has been worsened due to lack of health infrastructure, capacity, expertise and non-availability of vaccines despite COVAX and other commitments.

No wonder South African President Ramaphosa recently lamented the vaccine inequity calling it “Vaccine Apartheid” in Paris. The G7 countries have committed a billion doses but time is of essence.

South Africa and India were the first to urge the WTO and the developed world to temporarily waive the IPRs for their vaccines so that the disadvantaged people could have access to it.

India has always stood with Africa even if it formally announced its Africa policy only during the visit of Prime Minister Narendra Modi to Uganda in 2018 when he addressed their Parliament essentially proclaiming that India stands with and believes in “Africa for Africans and by Africans.”

He outlined the Africa vision through his ten guiding principles which include: Africa is among top priorities for India and momentum of cooperation will be sustained through regular exchanges; development partnership as per African priorities; preferential access to Indian markets for African products; assist in harnessing digital revolution in Africa; improve Africa’s agriculture potential and others.

These are ideal, achievable and collaborative policies that dictate a paradigm shift compared to other big powers who are trying to get into the ‘Gold Rush’ for exploitation by way of neo-colonialist approaches.

Capacity building and training programs as well as the extensive Lines of Credit (LOC) have been at the core of India’s outreach to Africa after championing their liberation struggles against colonialism.

The Indian technical and Economic Cooperation (ITEC) program since 1964 has focused on “Share and Care” under the spirit of South-South Cooperation and created a constituency of tremendous goodwill for India. No wonder, several African leaders fondly recall their Indian teachers even after 40-50 years.

Several military officers were trained in India and rose to become Heads of government and Heads of State in their countries like former President Olusegun Obasanjo of Nigeria who was singularly instrumental in expanding cooperation with India.

India also created its own India-Africa Forum Summits (IAFS) since 2008. At the 3rd IAFS in New Delhi Prime Minister Narendra Modi announced a fabulous package of concessional credit of US $ 10 billion, grants in aid of US $ 600 million and 50,000 slots for training and higher education over the next five years.

India has already extended 180 LoCs amounting to $ 8 billion to over 40 countries. The dictum about Indian technologies is that they are Available, Adaptable, and Affordable and fit in with the stage of development of a country or its constituents.

India’s outreach has generated tremendous good will over time, since these are demand driven according to African preferences. Similarly, Indian diaspora of about over two million is extremely important and is uniquely industrious in the region.

Even during the Covid-19 times, India supplied medicines, vaccines, and health related equipment to over 42 countries in Africa. India has been rendering health related assistance during all the calamities natural or otherwise–be it AIDs, TB and Ebola to Africa.

Speaking at the UN meet on Africa last month, India’s External Affairs Minister Dr S Jaishankar not only supported Africa’s legitimate place and representation at the reformed UNSC but also at other multilateral organizations.

He reiterated that India’s commitment to Africa is visible in its 189 projects in 41 African countries being implemented under concessional loans.

The commitment is expressed through providing medicines, health equipment, ambulances, books, vehicles, and food grains. Or indeed in the vocational training and IT centers set up across Africa, in the 43,000 education and training slots provided over the last five years, or the digital education and health programs with 17 African partners.

India-Africa trade and technology exchanges are steadily growing, in line with closer political and people-to-people ties. Whether it is debt relief or climate change, India treat Africa’s challenges as its own. This is what the Africans appreciate about India.

Asia-Africa Growth corridor (AAGC) with Japan and other infrastructure and capacity building partnerships with the US, the UK, France are some of the initiatives that could leverage reciprocal strengths to support the African growth story that has the potential to drive the Afro-Asian century, with its rich tapestry of human and natural resources, strategic location, youth dividend and the earnest desire to be in charge of their destiny.

The next India Asia Forum Summit, that was supposed to be held last year, will provide India and Africa a unique opportunity to recalibrate the ties to catapult the collaborative matrix into a much higher orbit as India expands its Africa outreach.