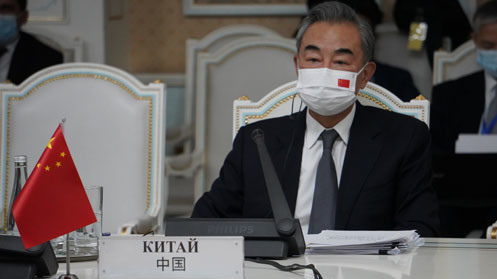 AKIPRESS.COM - Taliban, as a major military force in Afghanistan, should realize the responsibilities it bears for the nation, make a clean break with all terrorist forces and return to the mainstream of Afghan politics, Chinese State Councilor and Foreign Minister Wang Yi said on Tuesday, Global Times reported.

Wang made the remarks during a joint press conference with Tajik Foreign Minister Sirojiddin Muhriddin following their talks in Dushanbe.

Wang said that the Afghan government has done a lot of work for national unity, social stability and improvement of people's livelihood, which should be justly evaluated.

Wang stressed three priorities for Afghanistan. First, to avoid the further spread of the war in Afghanistan, especially an all-out civil war. Second, restart intra-Afghan negotiations as soon as possible and realize political reconciliation. Third, prevent all kinds of terrorist forces from gaining ground in Afghanistan.

China supports and expects all parties in Afghanistan to follow the principle of "Afghan-owned and Afghan-led," bear in mind Afghanistan's fundamental and long-term interests, build a political system that suits Afghanistan's national conditions and is supported by the Afghan people, Wang said.

Wang urged the US to reflect on its role on Afghan issue and how it will meet its obligations for Afghanistan's reconciliation and reconstruction.