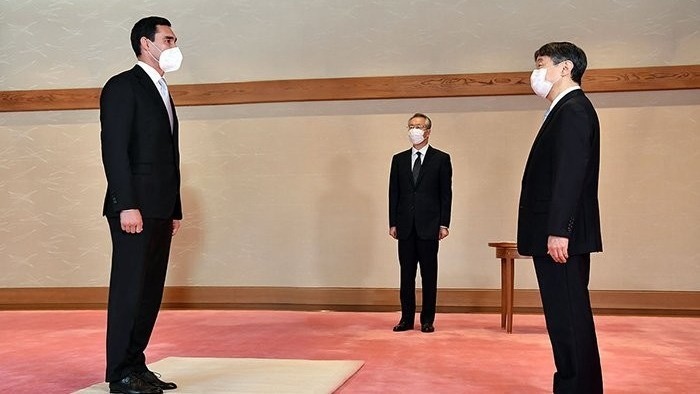 AKIPRESS.COM - As part of working visit to Tokyo, Deputy Chairman of the Cabinet of Ministers of Turkmenistan Serdar Berdimuhamedov was received by Emperor of Japan Naruhito, the Foreign Ministry of Turkmenistan said.

On behalf of the President of Turkmenistan Gurbanguly Berdimuhamedov, the head of Turkmen delegation expressed warm greetings to the Emperor and congratulations on occasion of the start of the XXXII Summer Olympic Games.

Emperor Naruhito expressed the wishes for peace and wellbeing to the leadership and people of Turkmenistan. D

uring the talk, the sides highly appraised Turkmen-Japanese relations on the whole spectrum of collaboration.

The same day, the meeting of the Chairmen of the Turkmen-Japanese and Japanese-Turkmen Committees on Economic Cooperation Serdar Berdimuhamedov and Hiroyuki Tsubai was held. The meeting was also attended by the representatives of business circles of Japan, among which such companies as Itochu Corporation, Mitsubishi Corporation, Sumitomo Corporation, Sojitz Corporation, Marubeni Corporation, Komatsu Ltd and Kawasaki Heavy Industries.

The parties discussed the current state and prospects of development of trade-economic and investment cooperation between the two countries. Such spheres as energy, extraction of mineral resources, gas chemical industry, transport, agro industrial complex and others were prioritized.

The parties also paid special attention to the strategic vectors of developing cooperation, including the issues of establishing in Turkmenistan a modern industrial-technological infrastructure in participation of Japanese companies, which might be used by both countries in the future for further improvement of economic ties with the regions of Middle and Near East, as well as the basins of Caspian Sea, Black Sea and the Mediterranean Sea.

The sides expressed adherence to further development of Turkmen-Japanese relations. Upon the outcomes of the talks, the signing of bilateral documents in the banking and financial spheres, as well as in the area of transport and road-building machinery took place.

Then, the Deputy Chairman of the Cabinet of Ministers of Turkmenistan Serdar Berdimuhamedov met with State Minister of Economy, Trade and Industry of Japan Kiyoshi Ejima.