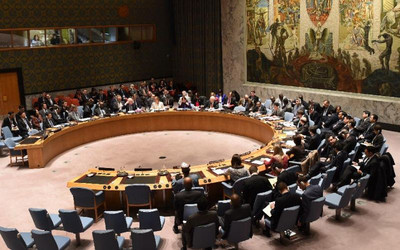 AKIPRESS.COM - Abdullah Shahid, the President-elect of the 76th Session of the United Nations General Assembly on July 22 supported India’s bid for a seat at the United Nations Security Council as a permanent member, ANI reports.

Shahid, who is currently foreign minister of Maldives said during his recent visit to New Delhi that we support the membership of India in the Security Council as a permanent member. As President of the General Assembly, it would be my role to bring the countries together, and try to form a broad consensus on Security Council reform process,” he said.

Calling “terrorism” a “scourge”, he said that the Council needs to address it comprehensively in its next Session.

“Terrorism is a scourge that has been in this region, in many parts of world and has taken lives of many civilians. It doesn't know any religion, borders or humanity. It's evil. We need to address it comprehensively,” said Shahid.

“The United Nation deals with terrorism issues in the Sixth Committee, the convention that has been mandated to come out of the Sixth Committee continues to be negotiated. So, I am hoping that the 76th Session will see some progress,” he added.

India had supported Shahid’s candidature to the top post and this is his first visit to any country after being elected to the prestigious post on June 7.

Commenting on the Chinese influence in the Indian Ocean waters, in trade and defense, Shahid said that a lot of small island countries found it difficult to repay development loans borrowed from China.

“The previous government in Maldives had taken a lot of development loans from China. Repayment was a challenge during Covid-19 for many countries…not only the Maldives, but for all small island countries as well as the LDCs (Least Developed Country). We have been able to talk to China and many other countries from whom we had borrowed. Through the DSSI (Debt Service Suspension Initiative) process, we are being given room to breathe. I think it is of great appreciation that the G7 has come up with DSSI process,” the Maldives Foreign Minister said.

On India, he said that the country has always been the first responder to the Maldives in times of need, even during the COVID-19 crisis.

We celebrate what India has done for us. We will continue to engage with other countries, that is the policy of current Maldives government. We are a friend to all and enemy to none," the UNGA President-elect told media.