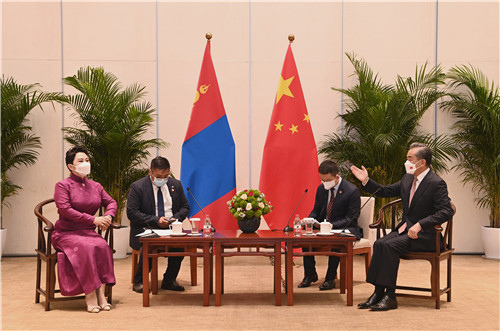 Wang Yi said, since the outbreak of COVID-19, neither China nor Mongolia has seen any imported infections from the other, while the two countries have supported and helped each other, leaving the touching story of "donating sheep and presenting tea leaves", and writing a new chapter of bilateral friendship. Under the political leadership of the two heads of state, China-Mongolia relations are embracing new development opportunities. China has always put its relations with Mongolia in an important position in its neighborhood diplomacy and hailed the top priority given by Mongolia to the development of relations with China in its foreign policy. China is willing to work with Mongolia to respect each other's independence, sovereignty and territorial integrity, respect each other's core interests and major concerns, and respect each other's development path; continue to enhance mutual trust and deepen mutually beneficial cooperation, and move bilateral relations continuously ahead along the fast growth track, so as to bring more benefits to the two peoples, help the region prosper and develop, and jointly build a community with a shared future for mankind.

China is ready to continue to provide Mongolia with necessary help in fighting COVID-19, and pool efforts to promote global cooperation against COVID-19 and oppose politicizing the origin tracing. Leveraging the strength of being close neighbors geographically and complementing each other economically, the two countries should establish a long-term stable partnership in the economic and trade fields. China will help Mongolia accelerate development to the best of its ability, and stands ready to strengthen cooperation with Mongolia in the fields of mining, energy, finance, agriculture, husbandry, and infrastructure construction. China will innovate new forms and contents of people-to-people exchanges, and maintain the momentum of exchanges between the two peoples, so that the concept of being good neighbors, good friends and good partners forever becomes the mainstream consensus of people from all sectors of the two countries, Wang Yi said.

Wang Yi pointed out, China is willing to step up communication and coordination with Mongolia in international and regional affairs, deepen cooperation within multilateral frameworks such as the China-Mongolia-Russia Economic Corridor, the Shanghai Cooperation Organization, the United Nations and the Asia-Europe Meeting, and jointly make a positive voice against unilateralism and for multilateralism, and against division and confrontation and for win-win cooperation.

Battsetseg said Mongolia hopes to maintain the momentum of high-level exchanges with China, appreciates China's policy of building relations with neighboring countries based on friendship, good faith, mutual benefit and inclusiveness, and thanks China for providing valuable support to Mongolia's economic and social development. Mongolia is willing to work with China to enrich the comprehensive strategic partnership between the two countries for new results. China has provided great help for Mongolia in the fight against the pandemic, and the Chinese vaccines have played a crucial role in the prevention and control of infections in Mongolia. Battsetseg hopes that both sides will actively facilitate the alignment of the Belt and Road Initiative with the Steppe Road Program, expand trade, strengthen people-to-people exchanges, and carry out long-term cooperation in mining, energy, railways, highways, people's livelihood, and combating of desertification and sandstorms. The Mongolian side fully understands the major concerns of China on sensitive issues, and has always pursued a policy of friendship with China and refrained from participating in any mechanism targeting specific countries. Xizang is an inalienable part of China's territory. Xizang-related issues are China's internal affairs, and Mongolia will not let Xizang-related issues interfere with the development of its relations with China. The origin tracing should not be politicized but be jointly pressed ahead around the globe. The Mongolian side is willing to work with the Chinese side to advance trilateral cooperation between Mongolia, China and Russia. Mongolia supports the Beijing 2022 Winter Olympic Games, and wishes this sports event a complete success.

The two sides exchanged congratulations on the 100th anniversary of the founding of the Communist Party of China and the Mongolian People's Party, and had an in-depth exchange of views on international and regional issues of common concern. Following the talks, both sides jointly met the press, and issued the Joint Statement on Further Strengthening Anti-pandemic Cooperation between China and Mongolia.