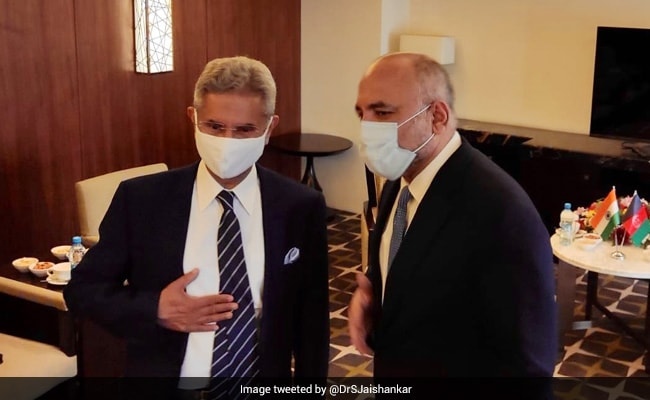 An Afghan government readout said Afghan FM called Dr S Jaishankar to "discuss convening an emergency UN Security Council Session on Afghanistan" and that the "UN & international community must play a greater role in stopping the unfolding tragedy in Afghanistan due to Taliban violence & atrocities. Appreciate the lead role of India as the current UNSC President. "

"Atmar, during a telephone conversation with Jaishankar, talked about the escalation of violence, widespread human rights violations by the Taliban and foreign terrorist groups operations in Afghanistan, and the need to hold a special session of the UN Security Council on Afghanistan," Ministry of Foreign Affairs, Afghanistan said in a statement.

Atmar discussed the unprecedented increase in the Taliban's brutal attacks on the Afghan people, which have resulted in the killing of scores of civilians and displacement of many thousands of others, it said.

Atmar also highlighted the war crimes committed by the Taliban in their recent attacks carried out in collusion with foreign fighters and terrorist groups in Afghanistan, calling them flagrant violations of international humanitarian law and warned of catastrophic ramifications, it said.

According to the statement, "Jaishankar called the holding of the UN Security Council meeting important for the immediate cessation of human rights abuses and the establishment of lasting peace and stability in Afghanistan and the region. He reassured Afghan Minister Atmar of his country's commitment to reviewing Afghanistan's proposal and conducting the necessary consultations."

The two sides also discussed the agenda and the level of participation in the upcoming meetings on the Afghan peace process in Doha, the statement added.

The development comes even as the Taliban has increased offensives in many parts of the country, including Herat, Kandahar, and Helmand. The Afghan foreign minister briefed Indian envoy Rudrendra Tandon, and other foreign envoys, on the situation in his country and how the Taliban is being supported by international terror groups.

On August 2, UNSC President, Indian envoy to the UN, T S Tirumurti, said, "the situation in Afghanistan is of deep concern to all members of the Security Council. We have seen in recent days, violence is only increasing and targeted killing has increased". He made the comments at the customary presser by the UNSC President on the first working day of the council.

He highlighted that "India has supported every opportunity that could bring peace, security, and stability to Afghanistan. We should address the question of violence and targeted attacks. "

A UN report said that the number of casualties from May to June exceeded the number between January and April. Recently, the United Nations Assistance Mission in Afghanistan (UNAMA) compound in Herat came under attack, something that was condemned by the international community.