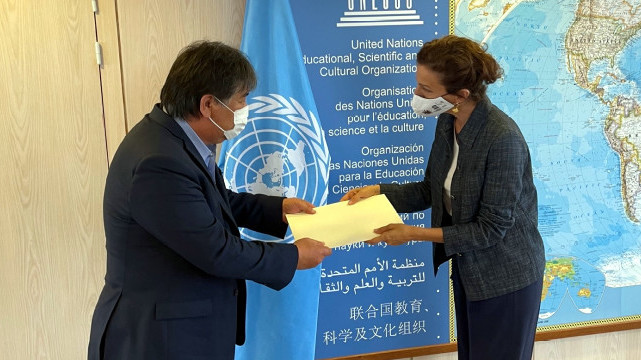 During the conversation, the special relations between Kyrgyzstan and UNESCO as a member of the Executive Council of UNESCO (for the period 2019-2023), as well as the role of the Organization in the world recognition of the cultural heritage of the Kyrgyz people were noted. Kyrgyzstan has achieved significant success in democratizing society, strengthening the civil sector, updating legislation taking into account the norms and principles of democracy and protecting cultural diversity, as well as developing the creative industry, which has been actively developing in recent years in the Kyrgyz Republic.

Sadyk Sher-Niyaz said that the Kyrgyz Republic realizes the particular importance of environmental protection and rational use of natural resources, dynamically participates in the activities of the world community to prevent global environmental threats and takes all necessary measures to fulfill the provisions of international agreements. In this regard, Kyrgyz Republic will make a proposal for the adoption of the Resolution "On the preservation of mountain glaciers" of the General Conference of UNESCO, which will be held in November this year.

The Director-General of UNESCO, as a former Minister of Culture of France, head of a division of the National Center for Cinema and Animation of France and a former colleague, noted the great experience of the new Ambassador of the Kyrgyz Republic in the field of culture and his international public activities and expressed her wish to assist in the implementation of future joint projects.

An agreement was reached on the creation of a joint Annual International Film Festival under the patronage of UNESCO, the purpose of which is to popularize and disseminate the ideals and mission of UNESCO - rapprochement of peoples and cultures, preservation of historical and world heritage, as well as the development and preservation of folk art and the opening of new capacities of cooperation in all culture areas.

Audrey Azoulay noted the readiness of the Organization to further build up cooperation with the Kyrgyz Republic and provide all kinds of assistance to the Kyrgyz side within the framework of a global campaign to support educational, scientific and cultural programs. Also in advisory and technical assistance in the preparation of the nomination "South Shore of Issyk-Kul" for joining the UNESCO Global Geoparks Network. This territory has a geological heritage of international importance, as well as a rich natural heritage, where there are several glaciers, one of which is the “South Enylchek”, which is the largest glacier in the Central Tian Shan. The UNESCO Peak 5063 m. is located in the same mountain range, in the Geopark.