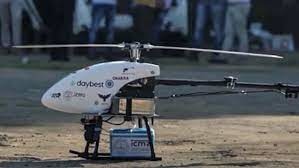 AKIPRESS.COM - India has started delivering COVID-19 vaccines to tough and hard-to-reach places using locally made drones, a move that could help it achieve its ambitious target of full inoculation for its entire adult population of over 940 million by the end of December, Nikkei Asia reported.

Soon after, one of the drones supplied COVID vaccines to the island of Karang in the middle of the region's largest freshwater lake, Loktak in Manipur state, making the 31-km trip in just 15 minutes. That journey would have taken up to four hours involving travel by road and boat.

"This is for the first time that a 'Make in India' drone has been used in South Asia to transport COVID vaccines," Mandaviya said.

The technology may prove "a game changer" in addressing the challenges in health care delivery in difficult areas, he said. "I strongly believe that this initiative will further help us achieve the highest possible immunization coverage for COVID-19."

Drones have been granted permission to deliver in the northeastern states of Manipur and Nagaland and the federally governed Andaman and Nicobar Islands.

As of Oct. 11, India had administered about 952 million vaccine shots, with more than 72% of its eligible adult population having received at least one dose and 28% fully immunized.

The South Asian nation of over 1.3 billion, which launched its inoculation drive in January, administered 7.87 million doses per day on an average in September, significantly up from 4.34 million daily shots in July, according to the health ministry.

India is vaccinating its population with Covishield, the local variant of the AstraZeneca vaccine manufactured by the Pune-based Serum Institute of India; Covaxin, a domestically developed vaccine produced by Hyderabad-based Bharat Biotech; and Sputnik V from Russia.

To reach the goal of fully inoculating everyone above the age of 18 by the end of this year, the country needs to further speed up the vaccination drive by administering over 10 million shots per day. It has so far achieved that target only five times since late August.

The government, however, seems confident. "We are moving pretty much on track," V.K. Paul, the government's top adviser on COVID-19, told a media briefing last week. "The vaccination program is heading toward that goal [as we want to] fully vaccinate our citizens as soon as possible."

India, the pandemic's second-worst-hit country, after the U.S., has so far reported 33.9 million cases, including over 450,000 fatalities. Daily infections have declined to fewer than 30,000 from a peak of more than 400,000 in early May.

However, the risk of a surge in infections remains as the Indian festival season kicked off last Thursday, a period during which people throng marketplaces and attend social gatherings.