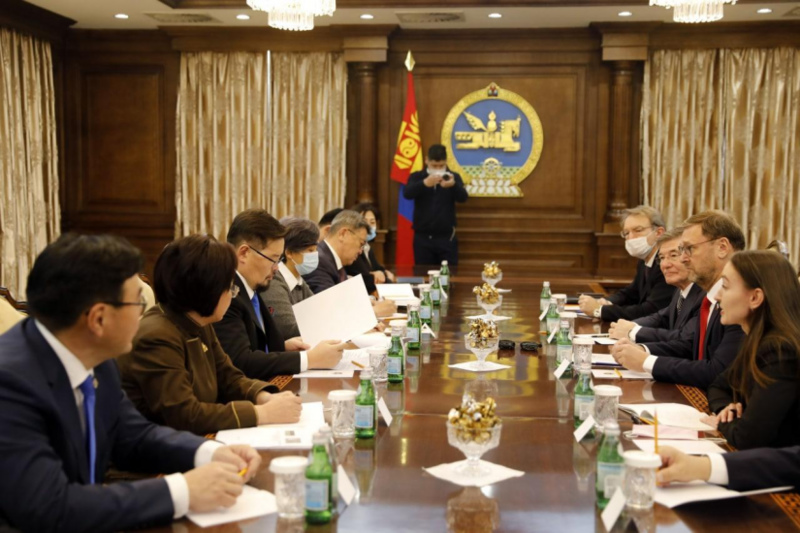 AKIPRESS.COM - Speaker of the State Great Khural G.Zandanshatar received delegates led by Deputy Speaker of the Federation Council of the Russian Federation’s Federal Assembly Konstantin Kosachev in the framework of the delegation’s visit to Mongolia in the framework of the 100th anniversary of the establishment of diplomatic relations between Mongolia and Russia, Montsame reports.

During the meeting, the sides agreed on how interparliamentary cooperation is an important part of bilateral relations, noting the active cooperation that has been carried out in recent years and its successful development.

Mr. K.I.Kosachev touched upon topics such as expanding the cooperation between the two countries’ young parliamentarians, introducing the method of cooperation between two countries’ legislative bodies in drafting and discussing bills in the Mongolia-Russia interparliamentary cooperation, exchanging practices being implemented in the fight against the COVID-19 pandemic, accelerating the studies carried out on establishing a Free Trade Agreement, and actively participating and providing mutual support in the operations of international and regional parliamentary cooperation mechanisms and organizations such as the Asia-Pacific Parliamentary Forum (APPF), and presented a draft for the five resolutions to be discussed at the APPF annual meeting that will soon take place in Seoul, South Korea in December this year.

In turn, Speaker G.Zandanshatar noted the Mongolia Third Neighbor Trade Act legislative bill drafted by U.S. Congress members, which is expected to support the livelihood of over 200 thousand herder families and over 50 thousand herder women by authorizing duty-free treatment of Mongolian-made cashmere and textile product export to the U.S., and put forth a suggestion to draft a bill on supporting the export of products from Mongolia to Russia in the framework of actively carrying out good neighborly relations between the two countries. He also expressed readiness for cooperation with the side of Russia in matters such as gender equality, terrorism prevention, post-pandemic economic recovery in the framework of international and regional parliamentary organizations.

“The State Duma of Russia began to work on the matter concerning a new mechanism for Mongolia-Russia interparliamentary cooperation. As Mongolia supports the initiative, I am confident that the Federation Council will also be involved in the mechanism’s activities, providing support,” said Speaker G.Zandanshatar.

Noting that the Federation Council will provide full support for the matter, Mr. K.I.Kosachev pledged to closely cooperate with the State Duma in order to create a unified structure.

During the meeting, the sides also discussed bilateral trade and economic cooperation.