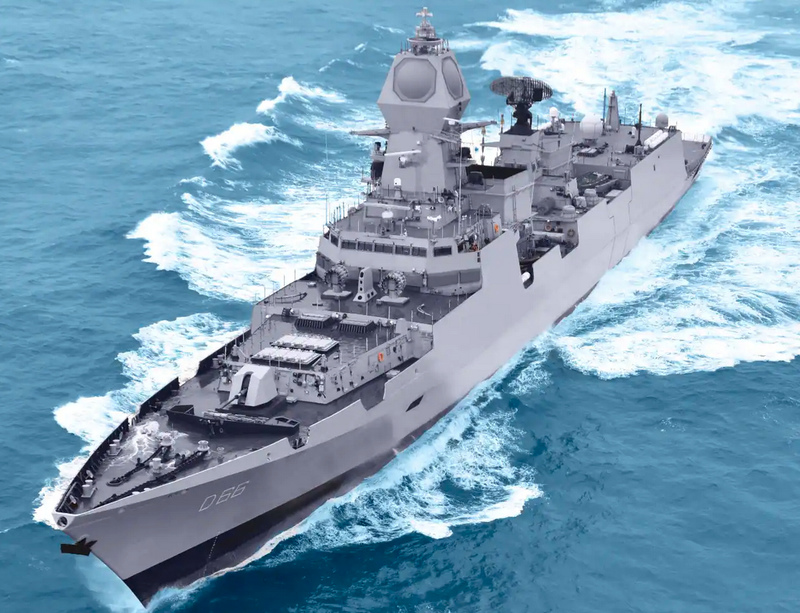 AKIPRESS.COM - The Indian Navy’s firepower got a major boost with the induction of INS Visakhapatnam, one of the four stealth guided-missile destroyer ships under Project 15B, at the Western Naval Command in Mumbai on Sunday, India Today reported.

India’s Minister of Defense Rajnath Singh along with top naval commanders was in attendance at the induction ceremony of the indigenously built Visakhapatnam, seen as another ‘Atmanirbhar Bharat’ (self reliant India) success story in the field of defense manufacturing.

Defense Minister Rajnath Singh hailed INS Visakhapatnam as a symbol of the growing maritime prowess of the country and a major milestone in achieving Prime Minister Narendra Modi’s vision of ‘Make in India, Make for the World’.

Singh defined the warship as one of the most technologically advanced guided missile destroyers in the world which will cater to the present and future requirements of the Armed Forces and the nation as a whole.

"Today, as INS Visakhapatnam manufactured in India is successfully commissioned, there is no doubt that in the coming times, we will be shipbuilding not only for our own needs, but also for the needs of the entire world. I'm confident that INS Visakhapatnam will live up to her name and strengthen our maritime security ," he said at the induction ceremony.

Visakhapatnam is packed with an array of weapons and sensors, which include supersonic surface-to-surface and surface-to-air missiles, medium and short-range guns, anti-submarine rockets and advanced electronic warfare and communication suits.

The ship is also equipped to fight under nuclear, biological and chemical (NBC) warfare conditions, an official said.

Amongst the largest destroyers constructed in India with an overall length of 163 metres and displacement of over 7400 tons, the warship is a potent platform capable of undertaking multifarious task and missions spanning the full spectrum of maritime warfare. The ship has a significant indigenous content of approximately 75 per cent.

Designed by the Indian Navy's in-house organisation, the Directorate of Naval Design, and constructed by Mazagon Dock Limited, INS Visakhapatnam has the capability of embarking two integrated helicopters and boasts of a very high level of automation with sophisticated digital networks, combat management systems and integrated platform management systems.

It is the first stealth guided-missile destroyer of the Project 15B under which a total of four warships are being built. The next ship is set to be commissioned in 2023 while the other two are planned to be inducted by 2025.

With the changing power dynamics in the Indian Ocean region, Visakhapatnam will augment the Indian Navy’s mobility, reach and flexibility towards the accomplishment of its role and tasks.

Defense Minister Rajnath Singh emphasised on the need to keep the Indo-Pacific region open, safe and secure, terming it as the primary objective of the Indian Navy. He asserted that India’s interests are directly linked with the Indian Ocean and the region is crucial for the world economy.

“Challenges such as piracy, terrorism, illegal smuggling of arms and narcotics, human trafficking, illegal fishing and damage to the environment are equally responsible for affecting the maritime domain. Therefore, the role of the Indian Navy becomes very important in the entire Indo-Pacific region,” he added.

The Indian Navy said in a statement that the commissioning of Visakhapatnam will “enhance our capacity and firepower to address the threats both in the above water and underwater domains.”