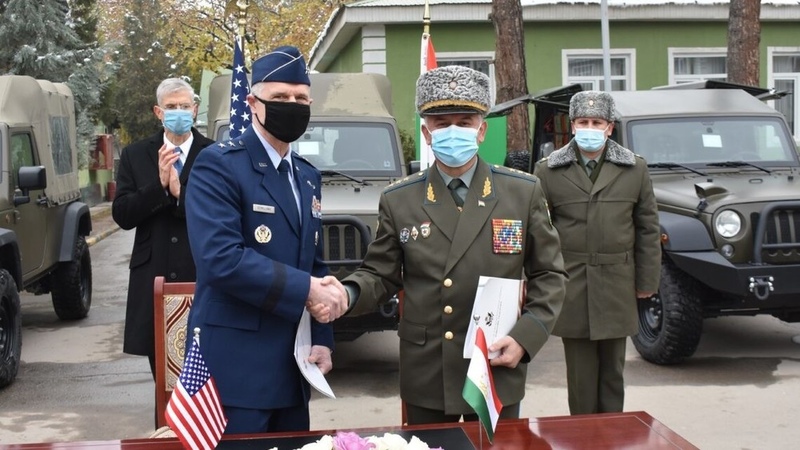 U.S. Ambassador John Mark Pommersheim, and Gen-Col Rajabali Rahmonali, Border Guard Forces Commander, participated in a handover ceremony for the light-utility vehicles. Speaking at the ceremony, Ambassador Pommersheim noted that, “This donation is just one example of the assistance we provide to Tajikistan to secure its borders. We are grateful for Tajikistan’s close cooperation in the field of border security and are proud of our joint achievements. We remain partners in the fight against drug trafficking, nuclear proliferation and terrorism. As evidence of our strong partnership, we have committed over $60 million in security-sector assistance to Tajikistan to be implemented and delivered over the next two years.”

Since 1992, the United States has provided over $330 million in security sector assistance to Tajikistan. This assistance includes training, equipment, and infrastructure. As part of this assistance, we have previously provided 378 vehicles to the Tajik military, valued at $11.9 million. We have also trained over 10,000 soldiers and law enforcement personnel on effective tactics for responding to terrorist threats and combatting drug trafficking. As part of this assistance, we have rebuilt or renovated 13 border outposts, nine border checkpoint facilities, two border guard detachments, and three training centers for border guards. Last year alone, U.S. security assistance to Tajikistan totaled $10.7 million, making the United States one of Tajikistan’s top donors in this realm. Additionally, last month the United States handed over 20 vehicles to the Ministry of Defense.

The United States has partnered with Tajikistan for 30 years and has provided $1.8 billion in development and security assistance through programs that support Tajikistan’s security, economic development, health, civil society, and education.